We’re celebrating Day #2 of American Chocolate Week with two recipes that’re not only delicious but beautiful too.  Today we present Chocolate Bourbon Bread Pudding from the Cheterfield Inn and Red Velvet Whoopie Pies from the Deerfield Inn.  Wow!  What a line up of fabulously decadent desserts to celebrate the week.  Just to make you feel better, we’ll remind you that chocolate helps you lower blood pressure and live longer too.  So bake to your heart’s content and celebrate American Chocolate Week with recipes from DINE member inns. 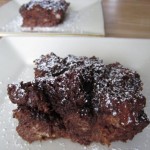 Chocolate Bourbon Bread Pudding is a favorite during Chocolate Week at Chesterfield Inn.

Combine milk, cream and sugar in a heavy saucepot and cook over med-high heat until sugar dissolves and mixture nears a boil. Remove from heat; add chocolate, stir until smooth. Beat eggs, vanilla and bourbon together to combine. SLOWLY whisk in chocolate into mixture in increments (to temper).  Toss the bread and cherries in this mixture and let stand for 30 minutes, stirring occasionally.  Preheat oven to 350 F. Grease the baking pan generously with butter. Add bread pudding mixture and cover with foil.  Bake 35 minutes in a hot water bath.

Remove foil. Continue baking another 10-20 minutes until set in center and a toothpick comes out clean.  Cool thoroughly on a rack. 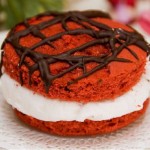 Mix cocoa and food color and set aside.  Mix baking soda and vinegar: set aside.

Blend in flour and buttermilk.

Mix together the filling ingredients and sandwich in between the Whoopie pies.