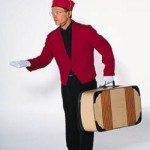 Recently, New York Times travel reporter, Joe Sharkey, revealed he was the most recent victim of what he refers to as the hotel fee-fest.  In a recent article entitled ” A Stingy Traveler Stung by Hotel Fees” Sharkey reveals that while he normally chooses midlevel hotel brands, a recent conference visit dictated that he stay at the Arizona Biltmore, a Waldorf Astoria Resort.  Not surprisingly, when he checked out the bill was higher than expected due to bellman gratuity fees  (even though he never used one) and housekeeping fees (even though he left a tip for the housekeeper).  Sharkey revealed in his story that the nickling and diming of hotel fees usually come in the form of added Internet fees, service fees (the Biltmore charges $28 per day for “service fees) and amenity fees.  Among the most pesky hotel fee  annoyance is the Internet fee, according to surveys of business travelers.

The scary thing for upscale travelers is what’s in store.  In his article, Sharkey revealed “The fee-fest is back in full force”, said Bjorn Hanson, dean of the Preston Robert Tisch Center for Hospitality, Tourism and Sports Management at New York University. In 2008, hotels added a total of about $1.75 billion in fees and surcharges. That fell to $1.55 billion in 2009 because occupancy dropped so sharply at the high-end hotels during the recession. For 2011, the figure will be higher; “in fact, it’s likely to be a record,” Mr. Hanson said.

As hotel fees climb and climb, luxury inns remain stalwart in offering fee-free added value.  In fact in a recent blog posting we revealed that Cape Cod’s Captain’s House Inn offered more than $200 in added value for items like complimentary breakfast, afternoon tea, DVDs, port and sherry, snacks and much morewhile  a nearby Cape Cod resort enthusiastically nickled and dimed their guests for these items.  Choose a hotel and it may be service with a smile, but that smile will cost a hidden fee of $15!  Arrive at a country inn or B&B  and not only the smile but the greeting by name is complimentary, along with the hugs goodbye and the candlelit breakfast.