In a recent USA Today story, travel reporter, Charisse Jones revealed a trend in hotels where bath tubs are being replaced by showers.  The article discloses that bath tubs are going the way of mints on the pillows; old traditions dying to save money or space.  According to Jones, hotels are no longer adding bathtubs to new properties to free up space.  Jones explains, “Holiday Inn has gone from roughly 95% of its newly built hotels having tubs a decade ago to only 55% of new structures featuring them now. Marriott plans for 75% of the chain’s rooms to have showers only. And Hotel Indigo, a 6-year-old upscale chain, never had tubs, except perhaps in suites”.

The article quotes Bill Barrie, senior vice president of design and project management for Marriott, who says the industry has been shifting from tubs to showers over the last five years. “There’s no time for baths,” he says.  Yet a 2008 survey by Embassy Suites showed a majority of travelers take a shower rather than a bath when on the road for work, but a tub or bath/shower combination is the first choice for vacations.  So if you’re vacationing at a hotel, your chances of a bath are increasingly bad. 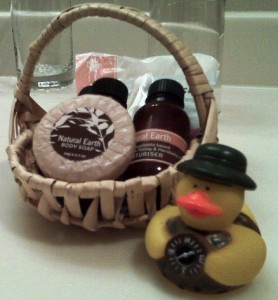 We’re always on the lookout for distinctions between inns and hotels, and here is an important one.  For all you bath-soakers out there no need to say bye-bye to bath salts and rubber duckies.  DINE member inns all offer guest rooms with private baths featuring whirlpool tubs, soaking tubs and bath tubs.  Add to that lovely bath salts, bubble baths and lotions, and themed rubber duckies and you don’t have to say goodbye to a lifelong American tradition of the luxurious bath.  Nothing says R&R more than soaking in a tub, and DINE innkeepers heighten that experience with beautifully decorated and equipped bathrooms with deep tubs for soaking.

A BedandBreakfast.com 2009 survey showed that nearly 70% of all inns and B&Bs in the United States offer whirlpool tubs, steam showers and multi-jetted showers.  Choose an inn or B&B and you are sure to find yourself soaking away stress in a luxurious setting.

At home, Americans are increasingly multi-tasking in their bathrooms. An American Standard’s 2008 Bathroom Habits Survey revealed that today’s tech-crazed consumers have extended multitasking into their bathrooms going beyond the usual bathroom activities to  checking e-mail, talking on cell phones and listening to iPods. The survey shows that more than a third of Americans read their mail — both snail mail and e-mail, 43 percent get dressed; 20 percent sing; 19 percent listen to music via radio or iPod; 15 percent talk on the phone, and three percent watch TV.  As multi-tasking continues so does distraction;  it’s a wonder more people don’t get shocked or destroy one or more electric or electronic toy in the bathroom.  Perhaps that’s the next survey we need to do to find out!

If there’s too much multi-tasking going on in your bathroom, you need to put away the tech toys and focus on one thing…quality R&R.  No one wishes they spent more time reading mail in the bathroom when they look back on the legacy of their life.  For a complete change, plan a DINE getaway complete with a deep, relaxing soak in your tub leaving all that TV and tech-stuff  plus the world’s cares behind.  Plenty of DINE member inns offer double whirlpools and soaking tubs, perfect for dual soaking.  If you’re a shower person, have no fear.  No need to head to the Marriott and pull in your stomach to fit into your shower.  Your private guest room comes complete with tub and shower at DINE member inns.

Here’s a sneak peak at just some of what’s in store for your next soaking sojourn. 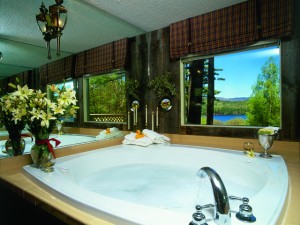 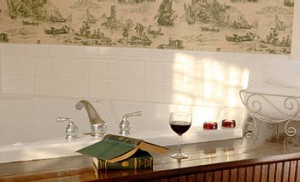 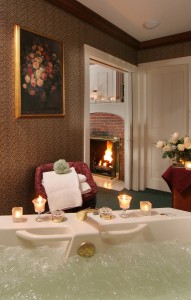