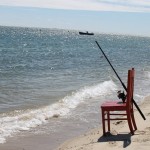 We’ve been following the exploits of the Red Chair ever since it visited the Captain’s House Inn last spring.  If you’re just tuning into this story now, the Red Chair says “move aside, Flat Stanley, I’m the new icon on the travel photo scene!”.  Last year a humble red wooden chair belonging to Beth Colt, the owner of the Woods Hole Inn in Woods Hole, MA made its way throughout Cape Cod on a photo journey.  The result was a collection of fabulous photos depicting the beauty of the Cape and Islands.  You can read more about the Red Chair’s getaway to the Captain’s House Inn here.  Just like any intrepid traveler, the trip around Cape Cod left good ol’ Red yearning for more, so in early August, the Red Chair embarked on a New England getaway, with the plan to visit all ten Distinctive Inns of New England throughout the fall. 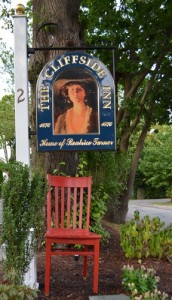 “There was so much to see and enjoy during my 3 days at the Cliffside Inn and Newport.  Innkeepers Nancy and Bill were great hosts, and I met some of the most interesting people at the inn and on my journeys around town.  The Cliffside Inn is in a very convenient location, and we were able to walk to many of the places that we visited (though I think Bill had some challenges finding a comfortable way to carry me around…comfortable for me that is!).

I spent some time each day at the inn, enjoying their really delicious breakfasts, and scrumptious wine and hors d’ouevres receptions at the end of the day.  I enjoyed a glass of wine with Nancy on the front porch my first  day.  I think she was surprised when I told her that my preference was for a glass of white wine, not red…I decided to mix things up a bit this evening.

Finally, the long-awaited dip in the Atlantic…at Easton’s Beach; right near the Cliffside Inn where I am staying.  The water was comfortable and quite refreshing after my Cliff Walk excursion.

I think Natalia has been watching a bit too much of the Olympics this week.  I didn’t know quite what she had in mind when she told me, “I was the perfect height for her”, but I was soon to find out.  Ola must have know what Natalia had in mind, as she was “camera ready” for this event.  The gathering spectators shouted out, “Perfect 10″ and clamored for more.

An often missed but, in my humble Red Chair opinion, one of the most interesting of the Newport mansions, is Rough Point; the Newport home of socialite heiress Doris Duke.  Rough Point is different from most of Newport’s other mansions which have been uninhabited by socialites for nearly sixty years. Rough Point was home to a living socialite well into the 1990′s and maintains an exquisite mixture of grandeur and homeyness that most of the other Newport mansions lack. The house has been preserved in time, nothing removed or added since the death of Doris Duke in 1993. Mrs. Duke was also an extrordinary preservationist and a great benefactor to the preservation of Newport’s colonial era homes.

Here I am in front of Doris Duke’s camel topiary. Doris had a thing for camels, and had two pet camels that summered with her in Newport. She would often buy them peanut butter cookies in large quantities as treats. Baby was the more vicious of the two, often sneaking up and chasing the security guards around the estate at night, biting them if she got close enough.  I couldn’t get these camels to move at all…and a good thing because I couldn’t have run very fast to get away.” 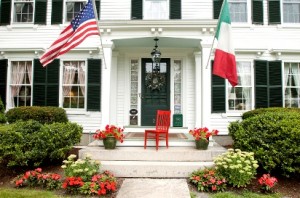 After Newport, the Red Chair made it’s way to Bar Harbor, Greenville and eventually to Camden where “set a spell” at the Camden Maine Stay.  It was most unfortunate that during the stay in Camden, the fog and rain were socked in. You’d think this might make for some rather gloomy shots, but actually the fog is good for Red’s image, making it stand out even more than it already does.  “I was really sorry we couldn’t take the Red Chair to the top of Mount Battie,” said Claudio at the Camden Maine Stay, but hats off to Claudio for capturing the Red Chair in the garden holding court with his fellow colorful chairs and then taking in the view over Camden Harbor. 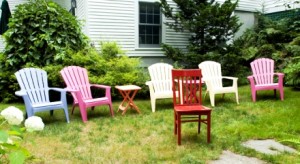 The Red Chair is scheduled for stops at each of the rest of the Distinctive Inns of New England.  Look for it to make appearances at the following inns.  Why not join the Red Chair for a visit during one of its stops. 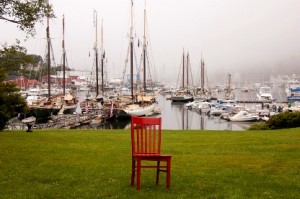