We’ve spent the last few weeks talking on the DINE blog about how the innkeepers and owners of the Distinctive Inns of New England make each of the properties so special.  No visit to any hotel or resort could result in the kind of warm relationship that guests have with the owner of DINE properties.  Visit any of the 11 DINE inns, and you’ll leave a friend.  Return again and again to visit your new pals.

Innkeepers are not the kind of people to blow their own horns often.  Yet, when it comes to being special, the eleven member inns have achieved their inclusion in the Distinctive Inns of New England through hard work and attention to detail.  Their tenacious efforts in providing hospitality and distinctive décor have also landed a long list of awards for the members.  Thus, the eleven member inns are not simply distinctive; they are award-winning too.

At the risk of sounding boastful we thought we might offer some insight into the kind of recognition the Distinctive Inns of New England have achieved.  You know they are distinctive, but did you know they are also considered among the best in the world by national magazines, travel websites, inngoers and B&B experts?  Let’s take a look.

All of the eleven Distinctive Inns of New England have passed a rigorous inspection process. They are either members of Select Registry, an association of luxury inspected inns, or BedandBreakfast.com’s Diamond Collection.  To qualify for membership in both of these organizations, the inns must undergo a meticulous inspection.  Those inns which are not members of these two organizations underwent an independent inspection from their DINE peers. Additionally, the Manor On Golden Pond is a member of the prestigious Small Luxury Hotels of the World. 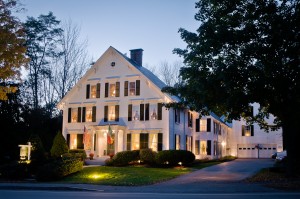 Recently, DINE member inns have received excellent accommodation from TripAdvisor. The TripAdvisor Certificate of Excellence is given only to establishments that consistently achieve outstanding traveler reviews on TripAdvisor worldwide. Approximately 10 percent of accommodations listed on TripAdvisor receive this prestigious award. The Chesterfield Inn, Cliffside Inn (2012and 2013), Rabbit Hill Inn (in 2012 and 2013), Inn at Harbor Hill Marina, the Camden Maine Stay Inn (2012 and 2013), Deerfield Inn and Captain’s House Inn all received the TripAdvisor Award of Excellence in 2013. The Gateways Inn received the award in 2012.

Additionally, a number of the DINE properties are four-diamond rated by the American Automobile Association.  To achieve four-diamond status, the inns must pass a rigorous inspection to qualify as a luxury property. Only 4.8 percent of more than 30,000 properties approved by AAA achieve this coveted distinction. The Manor on Golden Pond has achieved four diamond rating for both lodging and dining since 1997.  The Captain’s House Inn achieved its 26th year in a row of four diamond AAA rating in 2013.  Additionally, the Rabbit Hill Inn has received the four-diamond status for lodging and dining each year since 1992, and the Cliffside Inn received the four-diamond award in 2012 and 2013 after completing a top to bottom restoration the year prior (while maintaining that four-diamond status for the decade before too). 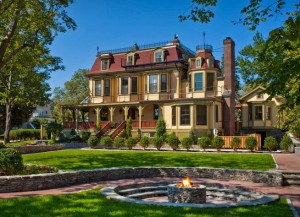 Many of the DINE member inns have achieved special acclaim by being included on lists or nominated for special awards.

The Cliffside Inn was selected as a Top 10 Luxury Inn by BedandBreakfast.com, recognized as a top inn around the world providing the best travel experience in this category.

The Captain’s House Inn has achieved inclusion in a number of esteemed lists including the 2013 Trip Advisor 25 Best Inns in America and 2012 Cape Cod Life Readers Choice Gold Award for best bed and breakfast/inn on the Cape and Islands. 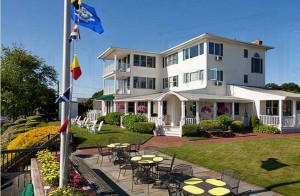 Closed for 18 months to rebuild after Hurricane Irene sent a five-foot wall of water through the lower level, the Deerfield Inn received perhaps the most prized award of all in April, 2013 – a certificate of occupancy to reopen in beautiful new surroundings. 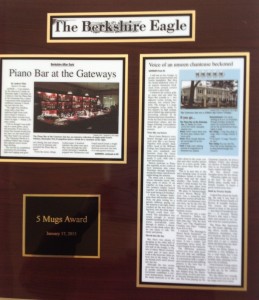 The Gateways Inn and Restaurant received a 5 Mug Award from the Berkshire Eagle. It is VERY rare that anyone gets more than a 4. The inn has also been nominated and is a finalist for Trendsetter of the Year from the Berkshire Visitors Bureau .  The winners will be announced at a Gala event on June 26.

The Inn at Thorn Hill ranked  12th in top 25 small resorts in Mainland U.S. in the Conde Nast Traveler “Best in the World Top 100” in 2010.   And the Grafton Inn was featured in Northeast Flavor Magazine, Fall 2012 and the TV Show Vermont’s Best Weddings and Getaways.

There you have it.  Award winning AND distinctive, DINE member inns are leaders,  exude excellence and have been recognized by their peers and the travel industry for the quality experience they offer.  We don’t blow our own horn very often, so this will be it for a while.  We’ll go back to simply providing warm and welcoming hospitality for guests whom we appreciate for the great reviews and patronage.