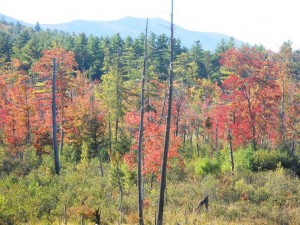 One of the most often asked questions at the Mt Washington Valley Chamber of Commerce(and probably at many chambers throughout New England for that matter) is “what day will the leaves change color?”  Those involved in New England tourism get a chuckle out of this question.  Distinctive Inns of New England innkeepers get the same question, with guests hoping to time their getaway with peak color.  There’s usually a two word answer to the question of perfect timing for your DINE romantic getaway…”it depends“.  Understanding how and why the leaves change color in DINE country will help you figure out the best time to schedule your fall foliage getaway.

According to White Mountains Attractions in New Hampshire, while it may seem that the gorgeous colors of fall are painted on the landscape, it’s really an intricate chemical process that prompts leaves to change their colors in the early weeks of autumn.

There are few places in the entire world where fall is so spectacular as New England, and each year the region draws millions of visitors to see the color show, which plays out during the unique weeks of weather in September, October and early November  in the six New England states.  Fall foliage time varies from state to state with the Northern New England states of Vermont, Maine and New Hampshire, along with the Berkshires region of Massachusetts peaking first and the more southern Rhode Island, Connecticut and Cape Cod coming later in the fall.  The good news is this means there is at least a six-to-eight-week window of catching fall colors in DINE country.

Travelers often note that sometime in mid-to-late August, the lush green leaves they have seen all summer begin to fade and 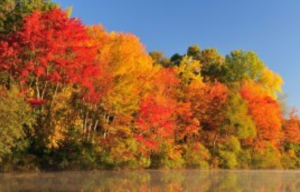 become a more dull color. That is  a signal that trees have made enough chlorophyll, which gave them that rich green color, for the summer months. As the days grow shorter and the nights become cooler, there is an imperceptible trigger that jump starts a chlorophyll break-down as the trees stop producing the food in a sort of natural preparation for winter. The green color on the leaves disappear, replaced by the hues of red, yellow and orange as fall marches through September, October and early November.

Just how vibrant the colors will be depends on other chemical processes. For example, the brilliant red of the maples depends on how much sugar is produced in the leaves and trapped in the chill of an autumn night. The more sugar that accumulates, the brighter red the leaves turn. And how vivid the colors will be dependent on other factors, such as how exposed to the sun the leaves are and the effects of warm sun.  If it’s been a particularly dry summer and/or the tree has been compromised by drought or flooding, the color will be impacted. 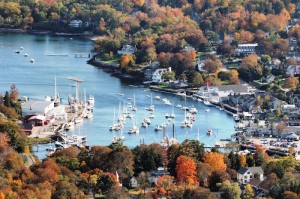 Despite all this science, each fall season  is predictably unpredictable and prompts endless discussions around the inns’ breakfast tables about how bright the leaves will be this year. As the leaves become brighter and brighter, talk will turn to when they will reach peak – that moment when when they are as vivid and spectacular as they can possibly be. That million dollar moment can simply take your breath away as you take it all in, especially when viewed against a brilliant blue sky backdrop.  This year, the talk has been around the vibrant color. All the rain of the past summer has left the trees healthy and the leaf peeping is consequently expected to be spectacular already in Northern New England. It’s already started. So don’t forget the camera!

No one can predict when foliage will peak and that is part of the wonder of fall in New England. It all rests with Mother Nature and her mercurial moods.  We can tell you, however, that peak foliage typically occurs in Northern New England  from the end of September through the second week of October. Even after leaves reach their peak in a certain area, the colors can hang on for a week or two.  In Southern New England, peak color follows a little later in October, and can often hang on into the beginning of November. For some real fun, follow the color as it moves south with a stay at each of the 11 DINE inns. 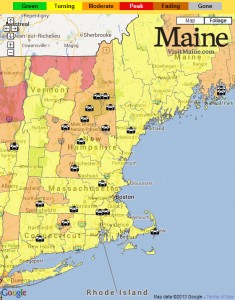 The Yankee Magazine Foliage Tracker Map is a great resource for planning your leaf-peeping getaway to any of the 11 Distinctive Inns of New England.  Leaf peepers from throughout New England collectively work together to provide up-to-date information about fall colors.  If you’re planning a fall foliage getaway to any of the DINE inns, be sure to book soon or forever hold your peep.  This is a popular time of year to visit all eleven Distinctive Inns of New England.  Be sure to visit the DINE availability calendar to make choosing a date and a room easy.