New England is the capital of all things maple and ’tis the season for the sap to be running throughout DINEcountry.  After the tough winter we’vew had the maple season got a late start due to colder-than-usual temps.  The snow build-up also made it tough to get to the trees to tap them. However, recent warmer temps have “zapped the sap” and the steam is now flowing from maple houses and sugar shacks throughout New England.

When it comes to maple, the Chesterfield Inn is all about adding it to ice cream…along with a little chocolate or bacon.  Bacon on ice cream?  Yup, it works when combined with maple syrup and some pecans.  Here are two easy recipes for sweet maplely delicious desserts, combining the sweet syrup with some rather unusual combinations.

Heat maple syrup in a small saucepan until hot. Whisk in cocoa powder, butter and a pinch of salt. Simmer, whisking for 1 minute. Serve warm over vanilla ice cream. 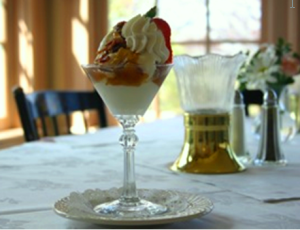 2 cinnamon sticks, broken in half

Combine maple syrup and cinnamon sticks in medium saucepan and bring to a boil over medium high heat. Reduce heat to medium and simmer until sauce thickens and reduced to 1/2-3/4 cup, about 5 minutes. Remove cinnamon sticks. Mix in lemon juice and ginger. Let stand at room temperature. Can be made 2 hours ahead. Serve with vanilla ice cream. Garnish with toasted pecans and candied bacon. 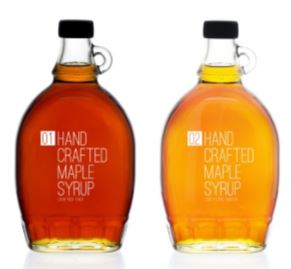 Bring cream, vanilla, white sugar, and syrup to a simmer.

Take off heat and slowly whisk into the bowl of egg yolks.

Strain mixture and pour into ramekins.

Chill for at least 4-6 hours; overnight is best.

Bring brandy, maple syrup, and butter to a simmer in a saucepan.

Reduce by half to two-thirds.

Set aside but keep warm.

For the sweet potatoes:

Arrange 24 slices of potato on a nonstick sheet pan or oven mat.

Brush with melted butter and sprinkle with sugar.

Bake at 400°F or until caramelized and crispy.

Center a potato crisp on each plate.

Spoon 1/3 of a ramekin of brulee on the crisp.

Sprinkle maple sugar on brulee and torch until dark brown but not burnt.

Repeat this process two more times, layering the chips on the brulee.

Of course enjoying your maple syrup along with an escape to any of the 12 Distinctive Inns of New England is always nicer than having it at home.  There’s plenty of room at the inns for a spring getaway.  Come enjoy a delicious breakfast, with sweet locally made syrup.  Time it right and you might even be able to tour some of the sugar shacks.