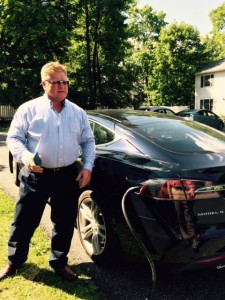 Dan, from the Boston area, charges is car at the Gateways Inn & Restaurant recently.

As Tesla and other electric cars gain popularity, the need grows for a network of charging stations throughout the U.S. No one is more concerned about this than Tesla Motors, makers of the luxury electric cars. Determined to eradicate the long-held perception that electric vehicles are only adequate for short, urban commutes, Tesla Motors has created its signature Destination Charging Program. This brilliant win:win campaign partners the forward-thinking car company with hotels, inns and other popular tourism destinations where charging stations are installed compliments of Tesla Motors to service guests. And that’s where Distinctive Inns of New England comes in.

Working with Select Registry, a national association of quality-tested inns and B&Bs, Tesla Motors is in the process of growing its Destination Charging Program via Select Registry member inns. A number of Distinctive Inns of New England (DINE) members are also Select Registry members and have signed on and worked with Tesla to install charging stations. Now, Tesla and other electric car owners can enjoy a relaxing night at the DINE inns while their car gets charged up for the next day of driving. In fact now electric car owners can enjoy an entire itinerary of DINE inns, creating the perfect New England road trip.

Each of the participating DINE inns has installed a dual charging station, accommodating both Tesla Motors and all other electric vehicles with a universal or generic charger. The charging stations are located in parking lots at each of the participating inns, making access easy. Each hour of charging equals about 60 miles of road distance for the Tesla cars, so a night of hook-up will easily power the car to its max. Most electric cars can go about 240-250 miles per charge. Imagine this concept: While the guest gets re-charged for another fun day on the road, his/her car gets its own special charge. Best of all, the charge is free-of-charge for guests of participating DINE inns. All chargers will be accessible and in service year-round.

Read on for which inns are involved. 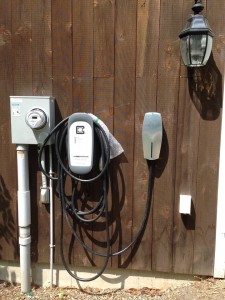 While not all DINE inns offer charging options, each of the 12 DINE member inns are within a few hours of each other – some much closer. Thus, it’s easy to create an inn-to-inn DINE itinerary, staying at any of the 12 DINE inns, and simply plan to charge the car along the way. Distinctive Inns of New England is getting quite a charge out of this charging for no-charge amenity! We hope that our guests will too.