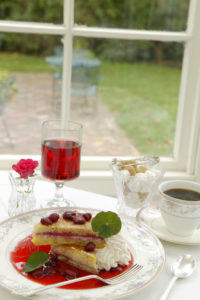 Good news for Coffee drinkers, that daily cuppa Joe you crave each morning not only gives you the energy you need, but it makes you smarter, healthier and happier too. We at Distinctive Inns of New England (DINE) know that a morning without coffee is like a B&B without breakfast! We’ve often thought that perhaps B&Bs should be called ABC’s: Amazing Beds and Coffee!  We know that coffee is just as important a part of our guests’ stay as the amazing breakfasts and hospitality we offer up.  That’s why each day at a DINE inn starts with a piping hot cup of coffee, served in hand thrown mugs.  Many of the DINE inns offer signature roasts, freshly ground that morning.  Either way, a romantic getaway at any of our 12 New England inns simply wouldn’t be complete without that fresh cuppa Joe each morning.  Coffee is quite possibly the new champagne, so raise your mugs and toast to all the health benefits of coffee after reading this story.

We like to follow a site called Power of Positivity, where we read about the 5 things that happen if you drink coffee each day.  Come along and learn all about them.

Say goodbye to that early morning workout.  Coffee will do the trick when it comes to revving your engines. The caffeine in coffee naturally boosts energy levels, which in turn rev the metabolism to start the day right. The effects are short-lived, so take advantage of the energy while it lasts.

Better yet, drinking coffee after a workout can increase the metabolism once again. According to the Power of Positivity’s article, a study published in the Journal of Applied Physiology found that endurance athletes who had a cup of coffee after exercise experienced a 66-percent increase in muscle glycogen, helping them to quickly replace energy stores used during exercise. So, drink your coffee before and after your morning workout, and you’ll be that much more energetic all day.

The Power of Positivity tells us that studies have found drinking three to five cups of coffee per day can decrease the risk of developing Alzheimer’s disease and dementia by as much as 65-percent in middle-aged men and women. Other studies have found that drinking coffee daily can lower the risk of developing Parkinson’s disease, a neurodegenerative disorder, by as much as 32 to 60-percent.  Wow!

Secondly, drinking coffee can block Adenosine in the brain, which decreases the firing of neurons and the release of beneficial neurotransmitters. Because caffeine inhibits adenosine, it increases the production of beneficial chemicals such as dopamine, serotonin, and norepinephrine,  responsible for mood elevating, feel good sensations.

Additionally, we learned from Power of Positivity that other studies have found that coffee increases cognitive performance, mood, reaction time, memory, and alertness.  Heck, it’s just about the healthiest, most positive elixir anyone could imagine!

Coffee contains many antioxidants, sometimes even more than fruits and vegetables combined. It also contains beneficial nutrients such as Vitamins B1, B2, B3, and B5, potassium and manganese. All of these contribute to the major lift one feels after drinking a cup or three of warm coffee each day. Drink a cup of coffee and do your happy dance!

Another study mentioned by the article in Power of Positivity and published in the Journal of the National Cancer Institute found that older adults who consumed four or more cups of coffee per day had a 20-percent lower risk of developing malignant melanoma, the deadliest form of skin cancers in the United States. According to the study, it’s the high amount of antioxidants and phytochemicals in coffee that protect against certain types of skin cancers.  That doesn’t mean you leave the SPF 50 at home when you visit a DINE inn, but combine it with coffee and you’re that much better protected from deadly skin cancers.

One more study by researchers at the Harvard School of Public Health, showed that people who increased their coffee consumption by one cup per day over the course of four years had an 11-percent lower risk of developing Type 2 diabetes compared with those who made no changes to how much coffee they drank. In fact, the study showed that those who decreased their coffee consumption by more than one cup per day increased their risk of Type 2 diabetes by 17%. So, now the mantra is not only a cup of coffee a day keeps the doctor away, but two to three cups are okay too.  Not just okay – healthier!

While a cup of coffee or more a day is important for your health and mood, combine it with a getaway to any of the 12 Distinctive Inns of New England and you also add in all the health benefits of vacations too!  Imagine how healthy and happy you’ll be after a coffee-filled romantic getaway to any of the 12 DINE inns! Plan your next romantic getaway at the 12 Distinctive Inns of New England by clicking on links below that will take you directly to each of their websites.