This is the third in our Brew-Inn series, where we highlight favorite microbrewery picks from the 12 Distinctive Inns of New England (DINE) innkeepers.  However, as we continue to travel throughout DINE country, we discover not only favorite microbreweries but also distilleries and wineries! The first post in this series covered a wide range of wonderful microbreweries in Massachusetts suggested by our innkeepers at Gateways Inn, Harbor Light Inn, Captain’s House Inn and Deerfield Inn.  Last week, we focused on Newport, Rhode Island,  highlighting Newport Craft Brewing & Distilling, the microbrewery and distillery favorite of Nancy and Bill at Cliffside Inn and makers of Newport Storm craft beers.  Today, we’re exploring options in Maine, a state where the craft brewing movement has exploded, but also home to some fabulous wineries and distilleries too.  While romance is always a staple of your visit to any of the 12 DINE inns, you’ll also find plenty of culinary and beverage adventure here in DINE country too. 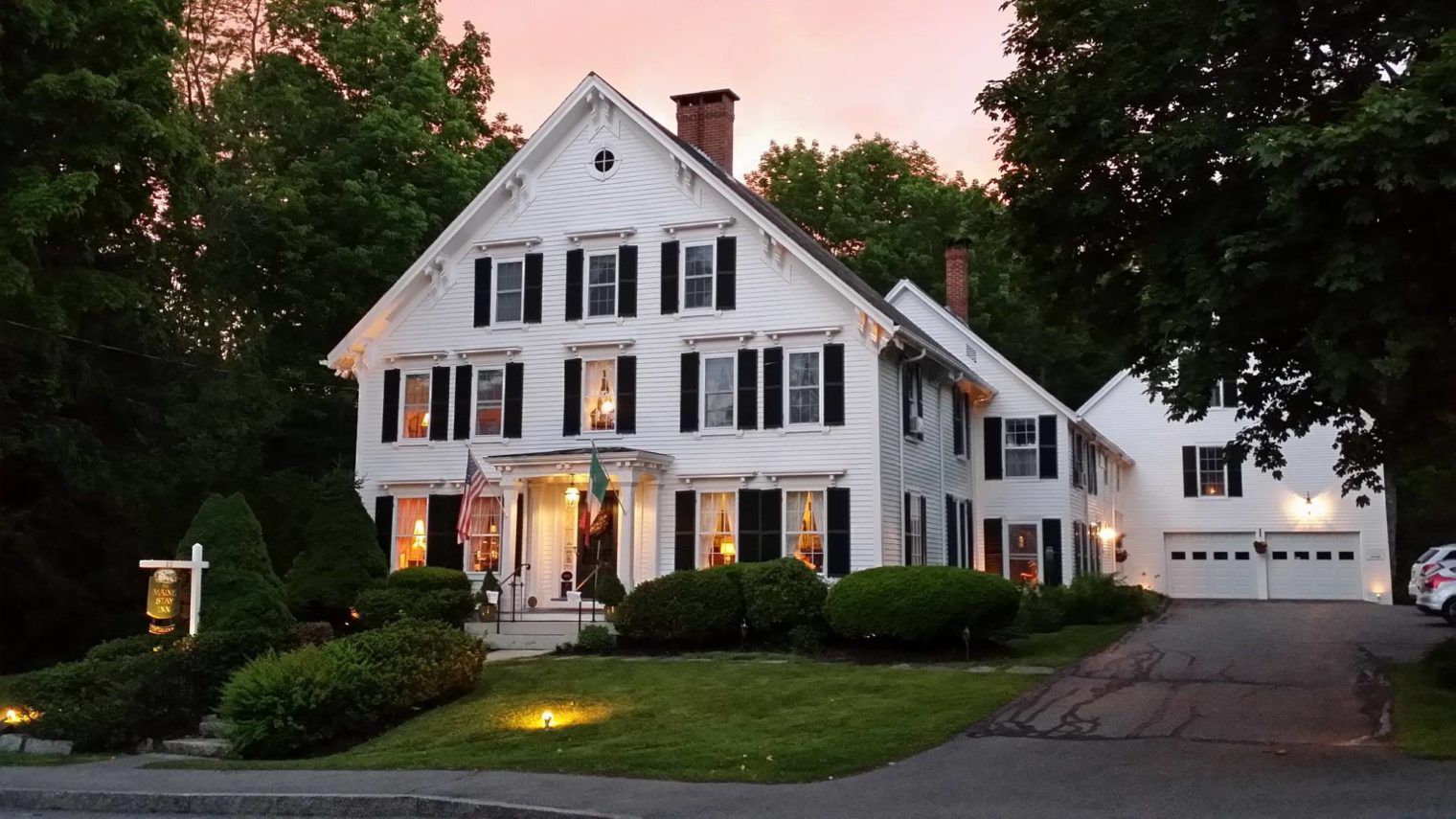 Our journey through Maine’s DINE properties starts in Camden, Maine with the Camden Maine Stay Inn, recently named among the top 5 New England inns to visit in springtime by Yankee Magazine.  Just a few miles from the Camden Maine Stay is Lincolnville, the home of Cellardoor Winery and Vineyard. Cellardoor wines are made in small, handcrafted batches with grapes sourced from premier vineyards across the country and from local Maine blueberries. Visit the main winery in Lincolnville located in a beautiful renovated 200-year-old barn where you can enjoy a tasting, browse the gift shop, or relax with glass of wine and a local cheese plate or small snacks available for sale.  During the warmer months, relax on the back deck and drink in the views and daily tours of the winemaking operations are available.  In addition, complimentary tastings are offered at the Farmhouse in Lincolnville and the Villa in Rockport every day. In addition to Cellardoor, there are several vineyards in Midcoast Maine, within a short drive of the Camden Maine Stay Inn.  Ask your innkeeper for the Maine Winery Guild Map or look for it at the visitor’s centers nearby.

Breakwater Vineyards is Maine’s newest vineyard and farm winery located in scenic Owls Head, just a few miles from downtown Rockland, and less than ten miles from the Camden Maine Stay Inn. The winery is named after the mile-long breakwater that protects the harbor in Rockland, ME. At Breakwater Vineyards, you will enjoy wine tasting and beautiful coastal views; with four samples for just $3.00. Sit on the relaxing porch and take in the views.  There are more than 2500 grapevines growing on this environmentally-conscious 32-acre farm. Breakwater Vineyards is open Monday through Saturday 12 -5pm, May through October. The winery is open for tours on Saturday at 1:00 pm.

In Union, Maine, located between Rockland and Newcastle, Maine, and perhaps about 34-40 minutes from Camden Maine Stay Inn, Sweetgrass Farm Winery and Distillery offers a wonderful chance to shop and taste at their own store from May 1 through New Year’s Eve. Sweetgrass Farm Winery and Distillery is reportedly Maine’s first farm winery and distillery using over 70,000 lbs. of Maine grown fruit and grain. The distilled spirits are hand crafted in old world tradition with a copper alembic still capturing the full flavors of their signature smooth Back River Gin, Three Crow Rum, and traditional apple brandy.  There are hiking trails, a picnic area and of course a tasting room and store to visit.  The winery and distillery also operate a year-round tasting room and retail shop in Portland, Maine’s Old Port too (324 Fore Street).  Throughout the year Sweetgrass also offers several events and concerts.  Click here for a list of events including Happy Hours, film festivals, open houses and more.

Not far from Sweetgrass and in Union, Maine, Savage Oakes Vineyard and Winery is found on a picturesque 95 acre Barrett Hill Farm dating back to the 1790s. Supporting production the vineyard offers ten varieties of cold hardy, hybrid grapes and 15 acres of wild blueberries along with naturally raised Belted Galloway beef cattle, pork and poultry. Today, the winery produces fifteen wines from grapes and wild blueberries, grown right there on the farm. The tasting room and store are open from Mid-May through October, then again on weekends during the holiday season Friday, Saturday and Sunday.  A number of food and wine related events are scheduled throughout the year including a Summer Concert Series with names like Melissa Etheridge coming for summer 2018. It’s a fabulous setting for a concert and wine tastings too. 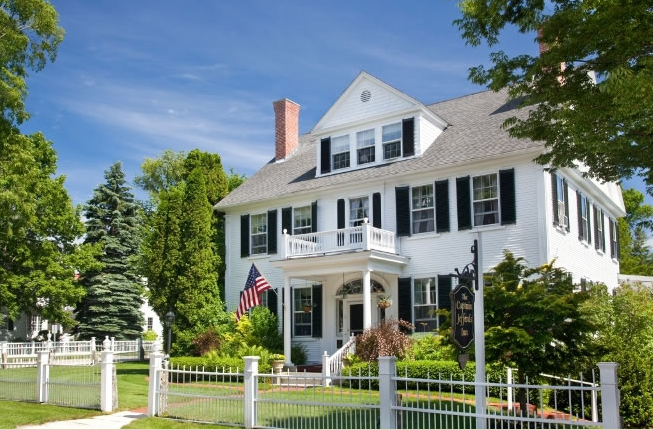 Moving away from Midcoast Maine and closer to Kennebunkport, home to the Captain Jefferds Inn, we reach hallowed grounds for beer lovers and Maine microbrewery options.  Portland is under a half hour from the Captain Jefferds Inn and offers a wide range of options for beer lovers. In fact, it’s been named among the top foodie and beverage cities in the country by many culinary magazines.  One great way to efficiently sample Portland’s brew scene is to take a ride aboard the Maine Brew Bus.  Choose from several wonderful themed brew tours with names like Breaking Brews or Thirsty Thursday and make stops for food and at three breweries along the way.  Your brew stops will be chosen for you but might include tastings at some of these Maine craft beer manufacturers: Liquid Riot, Lone Pine, Gruit, One Eye Open, Rising Tide, Austin Street, Foundation, Geary’s, Battery Steel, Bunker, Fore River, Foulmouthed, Flight Deck, Mast Landing, Island Dog, Good Fire.  Tours range in price from $50-$65.  The best way to reserve a seat is to reserve online.

Another rising star in the Portland beer scene, and probably the favorite of this blogger is Allagash Brewing Company, dedicated to crafting the best Belgian-inspired beers in the world. Best known for their flagship Allagash White, you’ll also find beer in oak barrels (beginning with the launch of Curieux in 2004) and spontaneously fermented beers (beginning with their traditional Coolship in 2007) here.  In fact, founder and owner, Rob Tod was honored as a James Beard Award nominee in the spirits category.  Free tours and tastings are available 7 days a week at multiple times.  Book your tour online here.

While in Portland, you can always stop by the Shipyard Brewing Company in Portland’s Old Port, one of Maine’s most well knowing brewing companies with its beer enjoyed throughout the country.  Full brewery tours are offered by reservation, and the tasting room and store are open daily. Gritty Macduff’s claims to be Maine’s original brewpub. You can see their microbrew operations and taste their signature Maine beers at any of their three pubs in Portland, Freeport and Auburn, Maine.

Closer to the Captain Jefferds Inn, continue your beverage expedition at Federal Jack’s nearby in Kennebunk. One of Maine’s first brew pubs, this popular restaurant is actually the birthplace of the Shipyard Brewing Company’s award winning-line of handcrafted ales. In 1992, entrepreneur Fred Forsley and master brewer Alan Pugsley established the Kennebunkport Brewing Company (KBC) and Federal Jack’s. Word of these fine ales spread quickly throughout Maine and demand quickly outpaced our size, and, in 1994, the expanded Shipyard Brewing Company was built Portland, Maine. However, this picturesque pub right on the waterfront, is well-known for its spectacular views, creative pub fare, and hand-crafted ales. The restaurant and brewery was built on the site where Kennebunk’s historic 19th century shipyards built schooners known throughout the world for their grace and speed and named after one of the most famous Maine Schooners, the Federal Jack.

Within an easy drive of Captain Jefferds Inn, combine a visit to the famous Kittery outlets with a visit to the Tributary Brewery Co. Tributary Brewing Company is owner Tod Mott’s long-held dream of brewing his own beer and having his own place to serve it. Tod has been a master brewer for over two decades, working with some of the region’s most renowned breweries. Most fans know him as New England’s brewing legend, the creator of the original recipe of the highly acclaimed Harpoon IPA, and Portsmouth Brewery’s cult-status, Kate the Great Russian Imperial Stout. This is definitely worth a stop for craft beer lovers.

Matt and Chris (the owners and operators)  of the Barreled Souls Brewing Co set out to create the kind of beers they would want to drink and the kind of brewery they would want to spend time at. This meant focusing on making a large variety of beers, using unique ingredients and processes paired with a large, comfortable and professionally run tasting room that carries 12 varieties on draft. The brewery operates a fifty-gallon brewing system. All of the beer produced at the brewery undergoes primary fermentation in oak barrels. The menu at the tasting room is large and varied.  You may need a few hours and a designated driver for your visit to this location in Saco, Maine. 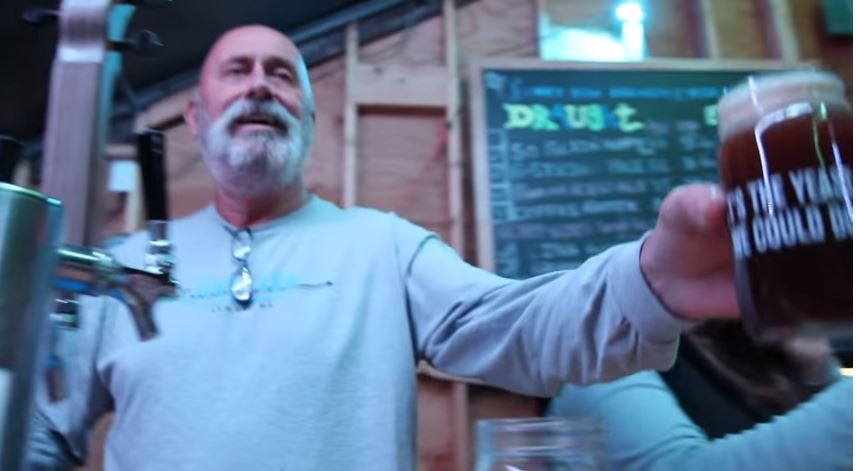 Our final stop on the tour of microbreweries in Southern Maine, worth a visit while staying at Captain Jefferds Inn is the Funky Bow Beer Company, deep in the woods of Lyman, ME. Go to their website, and the first thing you see is “Welcome to the Woods, Bub!” and you know they have a sense of humor and a penchant toward fun. When people ask them what they do for fun, their reply is, “we’re doing it!, It’s the yeast we can do”.  ” Growing greens and brewing beer is what is up at this The Farm.  They surround themselves with music, great people and live every day like it’s their last. Their extensive music calendar, their weekend growler nights, wood fired pizza and cool location make this a must-see when visiting Southern Maine and the Captain Jefferds Inn.

Visit each of the Distinctive Inns of New England by clicking below on links that will take you directly to each of their websites.  Better yet, visit them in person for your next microbrewery getaway in DINE country.