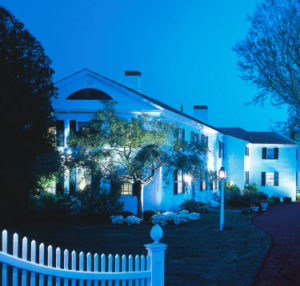 After nearly a decade as innkeepers at the Captain’s House Inn, James and Jill Meyer passed the reigns on to a team of owners/innkeepers with strong roots to Chatham and the legacy of hospitality and tourism the town offers.  As the new management team of innkeepers/owners, Drew McMullen, Todd Hearle and Karen Marjollet have “come home again” to Chatham to create a community collection of businesses for travelers and residents alike. All agree that their vision for the Captain’s House Inn is exciting and a bucket list career for the team.  The members of Distinctive Inns of New England are happy to welcome Drew, Todd and Karen to their family of inns and innkeepers. Let’s learn a little more about each one of them. 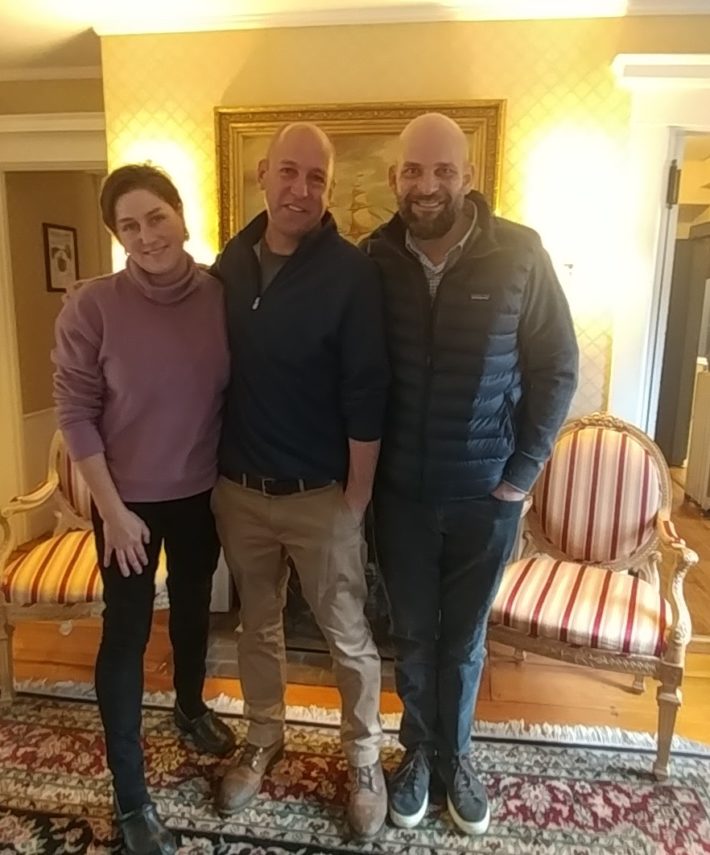 Meet the new team of innkeepers/owners at Captain’s House Inn in Chatham, MA

It could be said that Drew cut is teeth on hospitality at the Chatham Bars Inn. His first job as “Frappe Dude” at the Beach House there gave him some insight into hospitality and food prep that he used as he moved up the ladder to become a self-described ice cream expert via jobs at Buffy’s Ice Cream then Thompson’s Clam Bar throughout his high school summers.

Born in Chatham, Drew went to Chatham elementary and middle schools before heading to the Berkshires for boarding school.  He studied finance at the University of Colorado at Boulder and says he “minored” in skiing, taking full advantage of the fabulous mountain resorts in the Rockies.  After college, Drew spent the next 20 years involved in finance working at Lehman Brothers first, then with a firm specializing in start-up small specialty companies which eventually took he and his family to Florida.

Throughout his post-college days, Drew continued to spend summers and holidays in Chatham with his family there.  The dream of re-locating back to his hometown became a reality when he learned that the Captain’s House Inn was for sale.  He knew of its grandeur from the days when the Chatham Bars Inn would refer business to the Captain’s House Inn during the busy convention and social seasons and remembered its reputation for a fabulous high tea service and great customer service.  Over a two-month (or so) period the negotiations took place and on December 18, 2019 the keys were turned over to Drew and his business partner, Todd, as new owners of the Captain’s House Inn. 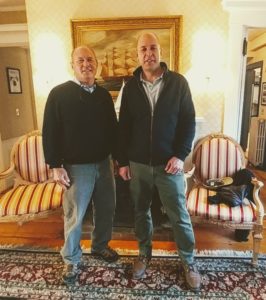 Drew (right) poses with his brother, Rob, also involved in the hospitality business on Nantucket, pose at the Captain’s House Inn.

Without any formal training, and only an introductory week or so at the Captain’s House Inn, Drew and a very capable team of interns and plus a chef “borrowed” from the Chatham Squire Restaurant, the inn re-opened after a brief holiday closure to a full house of guests to ring in the new year with a New Year’s Eve dinner and party. The fact that New Year’s Eve ended in a standing ovation for a fabulous dinner and stay speaks volumes into Drew’s ability to dive in and immerse himself into innkeeping at the Captain’s House Inn.

“We plan to maintain the wonderful amenities that the Captain’s House Inn has been known for,” explained Drew.  “We’re bringing back the cream and high tea and will continue to offer the complimentary wine reception in the evenings,” he explained.  Eventually, it’s Drew and his team’s goal to introduce themed dinners for guests and continue to grow the art collection here with pieces from local artist Debbie Hearle, the mother of Drew’s partner, Todd.

Drew’s family will move to the inn once the school year ends in Florida for his two children, aged 12 and 8, who can’t wait to spend a winter surrounded by snow. Drew’s primary focus will be on the Captain’s House Inn as Managing Director, while partnering with Todd, his friend of four decades, in a trio of additional businesses in Chatham.

Todd’s family moved to Chatham in 1984 when he was 12 years old so Todd’s Mom, Debbie, could open Hearle Gallery to display and sell paintings focused primarily on local Chatham scenes.  Todd and Drew met in middle school and still smile when telling stories of their antics as pals growing up in Chatham.

Todd’s college years were spent at the College of William and Mary in Virginia, steeped in colonial history.  Yet, his focus was on banking and finance, which landed him in New York City for 15 years after college, then on to a Summit Partners, private equity investment firm in Boston after that. 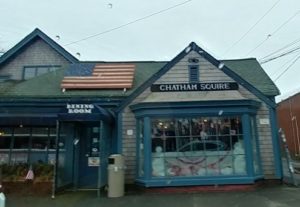 The Chatham Squire Restaurant on a rainy afternoon.

By 2016, Todd sought out new challenges, hoping to expand on his finance knowledge.  He yearned to return to Chatham where he spent holidays and summers with family and friends.  While in Boston, he’d met the owners of the Chatham Squire, one of Chatham’s most established and well recognized restaurants.  After owning the Chatham Squire for 51 years, the owners took some time in choosing their successors, but in June of 2019, Todd and his partners took ownership of the Chatham Squire. Once again, baptism by fire proceeded as the busy summer tourist season meant sold out lunches and dinners every day, with as many as 2000 meals served a day.

To further their partnership and the local experience for both the restaurant and the inn, Drew and Todd have also partnered with an offshore fishing boat to provide fresh fish for the restaurant and eventually for a “catch of the day” dinner at the inn.

In addition, after 35 years, the Hearle Gallery, directly across the street from the Country Squire restaurant, closed in December.  Todd and Drew are planning to create the perfect trifecta of tourism businesses by opening a store in that gallery space to offer inn, restaurant and local gifts to those seeking to take home a memento of their Chatham trip.  The store is expected to be open by the summer.

“I’m a Chatham boy at heart and am thrilled to be building a collection of small, niche, home-town businesses for those visiting Chatham,” shared Todd.  “We’ll share best practices between the businesses, and guests of the Captain’s House Inn will be VIPs at the restaurant and vice versa,” he explained.  While Drew focuses primarily on the Captain’s House Inn, Todd’s principal focus is on the restaurant, along with the other businesses he and Drew own. 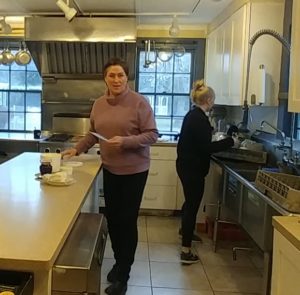 Innkeeper Karen busy in the kitchen of the Captain’s House Inn.

Karen was born and raised on Cape Cod in Harwich.  She still lives in the house she grew up in which she purchased for her family from her mother and lives with her husband and two children (two additional children now live on their own).  Karen went to school in Harwich and didn’t know Todd and Drew as a teenager but was acquainted with some of their siblings and friends.

After college in Indiana and a short stint in Providence, RI, like her compadres, Karen returned to the Cape, which was still considered home in her mind.  On October 30, 1995 (she still remembers the day), she walked into the Chatham Squire looking for job.  She was offered a 2-week fill-in position for someone who was on leave, and 25 years later is still working there.  Here’s where she met Todd and Drew once they purchased the restaurant.

Yet Karen’s idea of a dream job was to be an innkeeper. On trips to her vacation home in North Conway, NH she and her husband would visit inns with a dream of one day owning them.  When Karen learned that Todd and Drew were purchasing the Captain’s House Inn, a new synergy was formed, and it took no time for the three to put together the management team for the inn. Karen shares the role of innkeeper with Drew at the Captain’s House Inn.

Together, the Drew-Todd-Karen management team will continue to work with a very capable group of interns from Great Britain to welcome guests to the Captain’s House Inn in the coming years.  Former Chef, Kevin Case, who left the inn four years ago to pursue consulting projects, will return later in February to bring back the high tea traditions and grow some of the themed meal ideas the new team has.

Don’t forget, when you make your reservations, book direct for the best price.