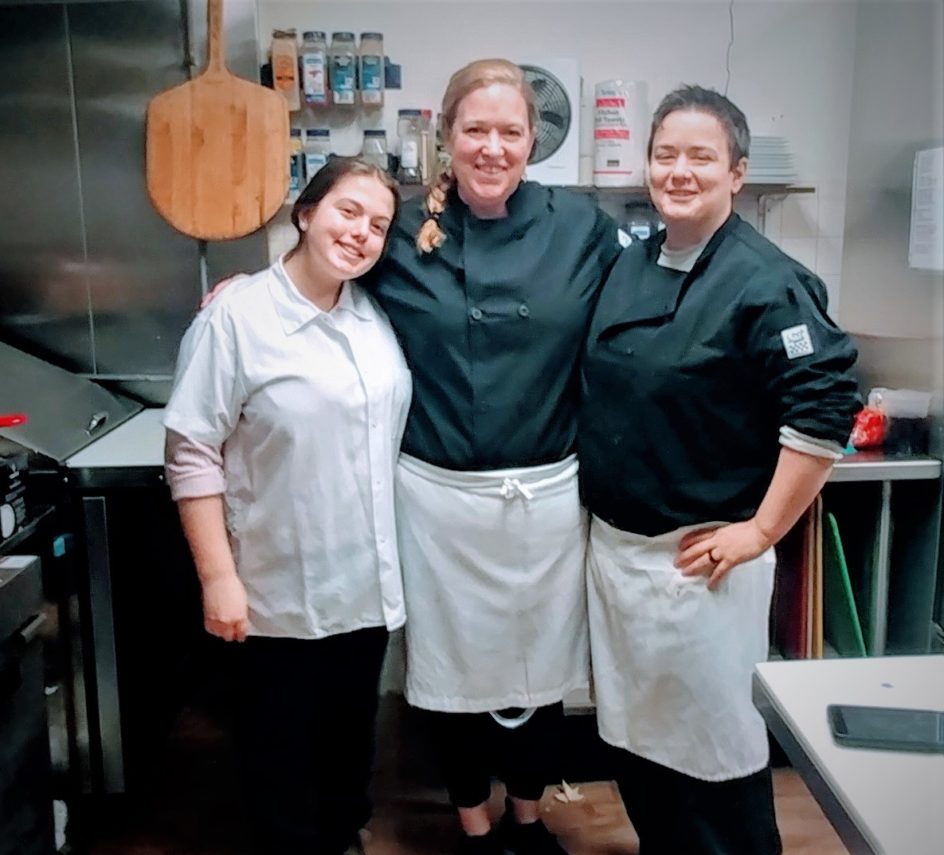 There are famous trios like the three musketeers, Ghost Busters, and Snap, Crackle and Pop, but when it comes to magic in the kitchen, no other trio holds a candle to the “quad squad” of the Gateways Inn & Restaurant– Trisha, Kandace, Sammie and Michele. The ten Distinctive Inns of New England all offer wonderful chefs and talented culinary artist-innkeepers, but Gateways Inn’s restaurant crew stand out with the only all-female kitchen in DINE country, and perhaps in all of New England.  From the chef to the dishwasher to the innkeeper/owner who manages the operation, women rule the kitchen at the Gateways Inn & Restaurant, referring to themselves as the Gateways “badass kitchen crew”.

Read on to learn what all kitchen staff agree is the key to their success and to meet the Gateways kitchen team. 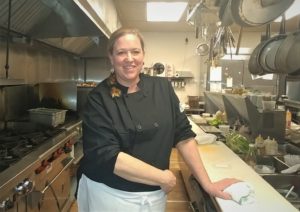 Trisha grew up in the Berkshires in Becket, MA and continues to live near the Gateways Inn as a lifetime resident of the region.  Her focus early in her life was not on cooking, but instead on working with children.  She earned a degree in early childhood education from Berkshire Community College. Yet when she was 24 years old, she started working with her sister’s catering business on nights and weekends.  Her catering skills also took her to Bucksteep Manor, helping with weddings.  After ten years of working with her sister’s catering business, Trisha moved into the chef position at a nearby sports bar.  Entirely self-taught, Trisha’s interest in cooking and food prep grew as she continued to grow her culinary career.

In 2017, Trish joined the staff at the Gateways Inn, starting as a bartender.  Soon she started helping in the kitchen with baking and breakfast prep. Her culinary prowess was immediately apparent to Gateways Inn co-owner and Kitchen Manager, Michele Gazit.  In 2018, Trisha was promoted to the Chef position which she continues to maintain, managing all food planning and preparation for dinners at the inn.

Trisha’s day generally starts before noon preparing all the homemade and locally sourced sauces, soups, baked goods and more.  “Our emphasis is on hand-crafted and locally sourced dishes,” she explains.  The food at the Gateways Inn & Restaurant is Kosher style, meaning no pork or shellfish will be found on the menu.

When asked about the all-female kitchen, Trisha explains this is by design.  “We have great communication in the kitchen and a strong mutual respect for one another.  The all-female kitchen is one point of distinction we’re proud of,” she explained.  And it’s respect that Trisha explains is also the key to the kitchen’s success. “What I love most about working here is the respect that (Gateways Inn owners) Eiran and Michele give to all of us. They’ve trusted me to create a kitchen culture here and a menu that shines, and they give me the latitude to make it work well,” she explained with a smile.

And that smile continued throughout a very busy Valentine’s Day sold-out dinner as Trisha brought that same joy to the food she prepared alongside her trio of fellow culinary sparkplugs in the Gateways kitchen. 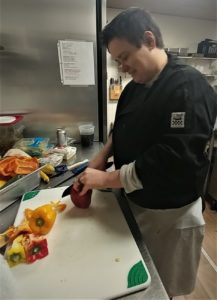 A fellow Berkshire Mountains native, Kandace was born and raised in nearby Pittsfield.  She attended Pittsfield High School and started working locally at a young age as a prep cook at Jimmy’s, a local landmark that has since closed.  After a ten-year tenure there, Kandace started cooking at Friends Grille – also in Pittsfield – a sports tavern offering typical American bites and cocktails, along with an outdoor tiki bar.

In July of 2019, at the height of the summer season, Kandace was hired as the sous chef at the Gateways Inn & Restaurant. It’s here that she says she’s happy.  “I’ve been around, and it’s here where we’re all one cohesive working group.  The owners treat us like family and it’s a fun place to work,” she explained.  Like Trisha, Kandace was quick to explain that the key to the success of this “badass” kitchen crew is mutual respect and respect from both management and guests. 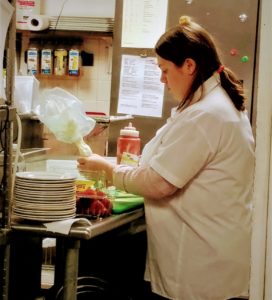 Sammie, a senior at Wahconah Regional High School, is as much an important cog in the kitchen team as everyone else.  Sammie started working at the Gateways Inn in May 2019 as a dishwasher.  On a busy Valentine’s night, she is away from the dishwasher to help serve salads and plate homemade desserts for the sold-out dinner roster.  Yet, as much as she loves being in the kitchen, her passion is flying.  She started taking flying lessons nearly a year ago and hopes to soon get her pilot’s license.  Her goal is to turn her hobby into a career and one day be a pilot for one of the major airlines.  In the meantime, the ever-present smile and energy Sammie brings to the kitchen is translated into her work.  She adds a key ingredient of joy to not only the food she prepares but the esprit-de-corps in the kitchen and tells us she loves being part of this all-female Gateways kitchen family. 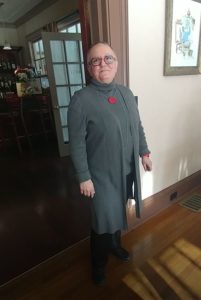 No story about the Gateways Inn & Restaurant’s kitchen team is complete without mention of the “boss lady”, Michele, turning this kitchen trio into the “badass quad squad”. Michele not only manages the “back of the house” (kitchen, events, music entertainment, etc.) but she has put her catering background to work, serving as the inn’s breakfast chef too.  Her mornings start at 6:00am with breakfast prep, greeting and seating guests at breakfast, and helping to plan guest itineraries. But her breakfast duties don’t end there. Throughout the day, Michele might be seen in the kitchen creating fresh-squeezed juice, handmade breakfast pastries, or choosing cheeses for the breakfast cheese board as she works with the kitchen staff to insure all’s ready for dinner service. Once dinner service starts, she’s helping when needed in the kitchen, expediting food, seating guests, working with the performers in the Piano Lounge and busing tables, if needed.  Not only does she work alongside the “badass” kitchen crew, she does everything she can to make their jobs easier.  Her day might end after 9:00pm, but not before she’s invited to the mic to lip synch a live rendition of Carol King’s “Natural Woman” with the two female entertainers in the Piano Bar on the night I happened to be there.  There’s no job too big or too small for Michele, and her “all for one and one for all” attitude adds to the respect the rest of the team feel.

“We’re like a family here”, says each of the kitchen staff at Gateways Inn & Restaurant, crediting the mutual respect for much of the restaurant’s success.

This is the first of many Meet the Chef profiles we’ll feature on the DINE blog.  In addition, a full compendium of recipes from the kitchens of all 10 Distinctive Inns of New England are available on DistinctiveInns.com.  Simply click on the RECIPE button within the nav bar.  Look forward to chef and innkeeper profiles coming up in future posts on this blog.  Meanwhile, don’t forget to book directly with your favorite DINE inn when you plan your next romantic getaway.