Years ago, we profiled the innkeepers managing the 12 Distinctive Inns of New England (DINE).  Several new faces have joined the scene replacing well-loved former members.  In the coming weeks we will focus on introducing new DINE faces and offering some insight into the minds behind this consortium of distinctive New England inns.

Ask Innkeeper and Deerfield Inn General Manager, Laurie McDonald, if she’s finished creating positive energy at the Deerfield Inn, and she’ll say “never”.  After several months of interim innkeepers, the Deerfield Inn now has a solid management team in place and the inn and its Champney’s Restaurant and Tavern are buzzing with smiles and recharged management.  Moving from lighting candles to lighting the path for new employees to thrive, Laurie has brought a sense of confidence and assurance to the Deerfield Inn and it shows.

A native of the Berkshires, Laurie grew up in Adams, MA and went to high school there.  She relocated with her husband who was attending the University of Massachusetts and started waiting tables at the Deerfield Inn when she was 19 years old. Her career at the Deerfield Inn over the next eight years included positions as server, then Banquet Coordinator and then the Assistant Restaurant Manager. In this time, her family grew from two to five.

In 1994, Laurie left the Deerfield Inn to become manager of Sienna, then one of western Massachusetts’ finest restaurants, with a 4-star rating and early reputation for innovative new American cuisine. Here she oversaw all front-of-house aspects of 80-seat operations.

Yet while she was working at the Deerfield Inn Laurie met Mike Kittredge, founder and President of Yankee Candle Company.  Impressed by her management skills, Kittredge recruited Laurie to help manage Chandler’s Restaurant, a 250-seat restaurant at Yankee Candle’s flagship store and village in South Deerfield.  As the second largest attraction in Massachusetts, Yankee Candle’s restaurant was considered more casual in the daytime, fine dining by night and high-volume all the time.  Laurie recalls lighting 250 candles each night for the candlelight dinner service.

For the next 17 years Laurie managed and lead the team at Chandler’s Restaurant. While sales for the Yankee Candle flagship store were flat, under Laurie’s leadership, sales grew at the restaurant, attracting attention from the higher ups at the company.  When the President of Retail for Yankee Candle recruited her to become the Director of Marketing and Promotions for the company, Laurie made the move from candlelight dinners to candle sales.  She managed the retail marketing for 580 Yankee Candle company stores across the country, lighting the way for retail communications and branding for the next seven and a half years.  In this position, she managed a $5 million marketing budget, national advertising campaigns, celebrity initiatives and a myriad of national sales promotions.

“I am incredibly grateful to Yankee Candle for the skills and career they gave me.  It was a wonderful and educational experience.  Where else could I learn finance from a CFO and leadership from the President of a company with a billion dollars in annual sales?  I was so lucky to work there,” she explained.

Yet, in her heart, Laurie yearned to return to hospitality, so when the innkeeper position at Deerfield Inn opened, she jumped on it.  Laurie assured the board of directors at Historic Deerfield ( owners of the Deerfield Inn) the career shift is exactly what she wanted and was energized by the opportunity and told DINE friends that since she took the position in September 2019 she’s never been bored for a moment. 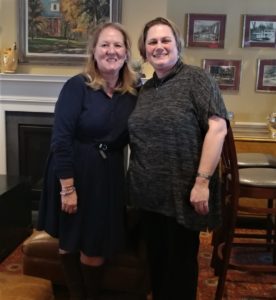 She hit the ground running on her first day as innkeeper and General Manager of the Deerfield Inn and has been running ever since, averaging 70 hours a week.  In the first 100 days on the job twenty-six people were hired, some she previously worked with at Chandler’s and moved into management positions at the inn, including Jodi Jankowski, Laurie’s Assistant Innkeeper and Kyle Gutowski, Champney’s Restaurant and Tavern Manager.  “We know each other’s strengths and we know how to work together well,” explained Laurie.  “Everyone I work with has an amazing work ethic,” she added.

“We’re shifting the thinking here to saying yes,” explained Laurie, and it shows in the positive vibe throughout the restaurant and the inn.  Additional seats have been added to the restaurant, and the menu now offers New England comfort foods like Chicken Pot Pie and Mac n Cheese, along with a wide variety of locally sourced appetizers, salads, entrees and desserts.

Walk into the restaurant and it’s abuzz with local residents, students and their families and couples enjoying a night out.  The ambiance is jovial, with live entertainment, fires flickering, and delicious food being served. 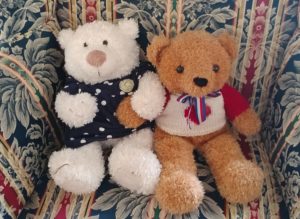 In the lobby of the hotel, the two adorable teddy bears still greet guests along with a huge puzzle table where guests take turns working on a puzzle in front of a flickering wood fire.  From the moment one enters, welcome signs are evident – both on the walls and in the attitudes of every person who works at the inn and restaurant.

Ask anyone at the Deerfield Inn and they give Laurie credit for creating a happy place to work and visit.  Comments range from their admiration for Laurie’s tenacity and hard work to her ability to problem solve and envision growth.  Laurie shared plans to open the downstairs patio at the inn and add grilled foods and live music midweek during the summer, along with an interest in growing room revenues too.

In her “spare time”, Laurie serves on the Board of Directors of Greater Springfield Convention & Visitors Bureau and is a Guest Lecturer, Isenberg Graduate School of Management, University of Massachusetts and Bay Path University. Laurie embraces any opportunity to give back to the community. She is dedicated to charitable work and public service, focusing on volunteering with the St. Jude’s Children’s Research Hospital and Franklin County Community Meals.

Wife of a busy golf pro, and mother of three adult children, she also has six grandchildren, all of whom love spending time with her at the inn.

Laurie says she’s grateful for the opportunity to get to know the other innkeepers involved in DINE. “They are an incredibly smart group of people,” she said smiling.  Of course, the DINE membership is thrilled to have Laurie join the organization and know that her marketing and leadership skills will translate to good things for all DINE guests too.

Look for Laurie and say hello during your next visit to the Deerfield Inn.  And be sure to say a special hello to each of the innkeepers when you book direct for your next stay at any of the 10 DINE inns.