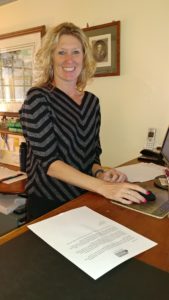 Spend any amount of time at the Grafton Inn and you will certainly have the good fortune to meet the innkeeper, Angela Comstock.  You’ll recognize her by the broad smile on her face and the friendly welcome.  Whether engaging with guests or with her loyal staff, it’s her sense of brightness that draws people to enjoy being around her.

Everyone always asks Distinctive Inns of New England (DINE) innkeepers about how they came to be innkeepers.  All 11 DINE innkeepers bring fascinating backgrounds with them to their inns .  We love sharing the stories of our innkeepers on the DINE blog.  Look for other chapters in our “Meet the Innkeepers” series, which we continue today with Angela.

A Vermonter through and through, Angela Harford was born in Claremont, NH but grew up in Chester, VT where she went to high school.  She attended the University of Vermont and then attained a degree in liberal arts from Community College of Vermont (CCV).

Angela went to work right out of college at CTM Media Group, based in Chester. As the Director of Sales for Northeast and Western Ski Resorts, she attended many national ski industry meetings and traveled between ski resorts throughout the country for more than a decade.  Along the way, she met her future husband, Kirk Comstock, whom she married in 2014 after a long friendship.

As CTM Media began moving into the digital space, and at 35 years old, Angela yearned for a little less travel and a little more of Vermont. Spotting a job opening for Director of Sales at Grafton Village Cheese Co, Angela applied, but the management had other plans for her. Angela was hired at the Grafton Inn as Director of Events and Sales and then was married to her long-time boyfriend, Kirk, in May 2014.  Her Director of Events stint was short, however, as she was promoted to Interim Innkeeper at the Grafton Inn nine months later when the position opened in September 2014. 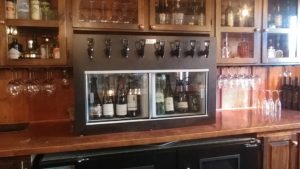 Wines on tap in the Pine Room at Grafton Inn.

The Grafton Inn is owned by the Windham Foundation, also based in Grafton and dedicated to preserving Vermont’s rural way of life.  Angela admits that being a young enthusiastic woman in a traditional foundation setting was a challenge.  Yet through tenacity, hard work and skills in business management, Angela slowly became the new face of inn. As that happened, the Foundation Board of Directors eventually began to listen to Angela’s appeals for updates and changes to the inn. The first project Angela and Kirk worked together on was early on – the addition of the second floor in the Phelps Barn in 2013. In 2017, at Angela’s suggestion, the Board of Directors approved the addition of the Pine Room, the cozy bar room adjacent to the dining room.  Angela researched cost savings and stuck to a stringent budget and six-week timeline to complete the project. Kirk designed the room and built the bar. The result was the addition of a new room that looks like it’s always been there.  Within a year, the revenues from the Pine Room were earned back and with that, Angela also continued to earn the ear of the Foundation board.  Since then, changes suggested and managed carefully by Angela have included the all new dining room tables in the inn’s dining room, and furniture and décor updates in guest rooms. 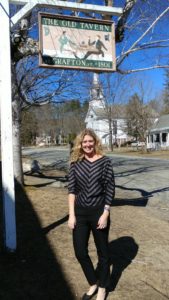 Now in her fifth year as innkeeper of the Grafton Inn, Angela says, “It’s been quite the ride.  I’ve learned so much!”. She tells us “I love the staff and the people who come to the inn. I so enjoy hearing our guests’ genuine love for this property.”

Yet Angela admits while never intimidated by a challenge, the Coronavirus pandemic has been the biggest test of her fortitude yet. “I have to simply hold tight, be strong and be firm,” she says referring to the challenges the virus has had for the entire tourism industry in Vermont and beyond.  The inn and restaurants are presently closed for a pre-planned spring cleaning through April 9th, but the inn is considering offering take-out menus from Phelps Barn soon. Stay tuned to the Grafton Inn’s Facebook page for updates.

Look for Angela and say hello during your next visit to the Grafton Inn. In fact, be sure to say a special hello to each of the innkeepers when you are able to travel once again to DINE country.  In the meantime, be sure to visit us online and start planning that New England inn getaway you’ll really be ready for it once it’s safe to travel once again.