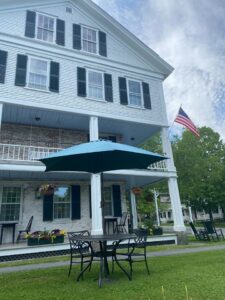 Technically, we started the Meet the Chefs series back in February with a description of the all-female “badass” kitchen staff at the Gateways Inn back in February.  Then the pandemic hit, and we had to put our chef series on hold.  As the Distinctive Inns of New England (DINE) begin to open again, it’s time to start focusing on the highlights of travel throughout DINE country once again. After months of the same four walls, the 11 Distinctive Inns of New England are re-opening and welcoming guests for safe, intimate and healthy romantic getaways.  Add in fabulous food that our amazing DINE chefs offer, and you’ll understand why our DINE acronym is so appropriate.

This week, we travel to the Grafton Inn in Grafton, VT, one of the original stagecoach inns in New England, and one that’s always been renowned for its fabulous food.  We’ll take a closer look at what motivates Executive Chef, Cal Hingston and his staff to create inspiring menus with a fresh approach. 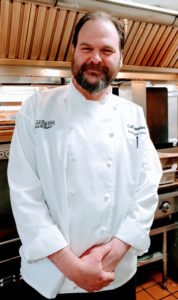 Born in Claremont, NH just 30 miles from the Grafton Inn, Chef Cal attended school in the Claremont school system while growing up.  After graduation from Claremont High School, he enrolled in the University of New Hampshire’s Hospitality Management Program where his inspiration for cooking began. During his senior year at UNH he had the opportunity to be involved in the opening of a new tech center which included a huge new kitchen. “I saw that kitchen, and I knew I had to be involved in a culinary career,” explained Chef Cal. He followed his time at UNH by enrolling and graduating from the New England Culinary Institute in Montpelier.

Cal’s first foray into restaurants was as an intern at Bella Luna in Portsmouth, where he honed his skills in Mediterranean cooking.  After Bella Luna, he felt it was time to settle down, and he married his girlfriend from the University of New Hampshire and then started a family and moved back to his hometown of Claremont.

Cal’s initiation into working at inns started with the Norwich Inn in Norwich, VT where as Chef he originated the locavore dinners and beer pairing dinner series that are still popular today.  From there, he moved to the Putney Inn and worked as the last chef there before the inn closed.

Fast forward to 2014. By chance one of his food vendors told Cal that the Grafton Inn was looking for a new chef. “I’d always wanted to work at the Grafton Inn,” said Cal. “The quiet small New England postcard town and the professionalism of the inn really attracted me,” he explained. So he threw in his name for consideration and was hired as Executive Chef shortly thereafter. 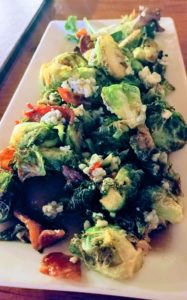 “Every restaurant has its own strengths and differentiators,” described Chef Cal in a recent conversation. “Here at the Grafton Inn access to fresh products sets us apart. We have two greenhouses, and a full vegetable garden so our menus can be crafted around what’s fresh and seasonal,” he added. Favorites like the amazing burgers, roasted brussels and potstickers are so popular, however, that they can never come off the menu.

When asked about what inspires him, Chef Cal explained “I love the atmosphere of working at the Grafton Inn.  The entire staff is passionate about what we do and serving our guests in the best way we can.”  Cal then turned the conversation to the inn’s Innkeeper and General Manager, Angela Comstock, explaining that it’s Angela that motivates him and the rest of the staff. “We all want to be a part of what Angela has built here. She leads by example,” he explained.

After interviewing Chef Cal, and hearing about what a great place it is to work, I was ready to sign up to work there too! 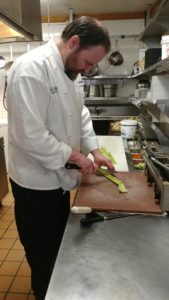 The focus at the Grafton Inn is on scratch cooking. All breads, sauces, ice creams, pastries and so much more are made from scratch in the kitchen.  Once fully reopened, guests of the Grafton Inn can choose to dine in the more formal 1801 Tavern, the adjacent Pine Room Bar or in a more casual setting within Phelps Barn Pub. However now as Vermont continues reopening, guests may dine on the porch, patio and lawn. Reservations are required. Socially distanced tables are the new norm too.  For complete guidelines for dining at the Grafton Inn during reopening, click here.

Get ready to dip your toes back into travel this summer with a getaway to the Distinctive Inns of New England.  Delicious, serene, safe getaways await as new protocols and procedures have been crafted to insure sanitization, cleanliness and safety of all guests.  Don’t forget the masks, required at all DINE inns, and please book direct with the inn when making reservations.