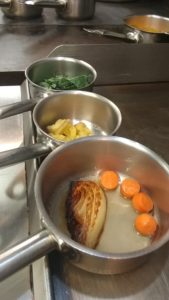 We are on to the third of our series focused on the amazing chefs you’ll meet on your visit to the Distinctive Inns of New England (DINE) with the introduction of Chef Andrew Hunter and Sous Chef, Joseph Ganley from the Rabbit Hill Inn.  Earlier in the series, we met the “badass kitchen trio” at Gateways Inn and then last week, caught up with Executive Chef, Cal Hingston, at the Grafton Inn.  Over the next few months, as inns are now re-opened, we hope to feature the chefs at all of the 11 Distinctive Inns of New England.

When traveling about DINE country, you’ll be treated to the ultimate in culinary vacations from handmade breakfasts to fresh baked afternoon refreshments and teatime treats to creative dinners.  Our Meet the Chefs series will focus on the chef-run teams in DINE kitchens, so you’ll have a sense of the personality behind the dinners when you dine at a DINE inn.  Doesn’t our DINE acronym work perfectly?

Today we’ll focus on the dynamic kitchen duo at the Rabbit Hill Inn. Sharing an amazingly compact kitchen, these two chefs work in synch doing the culinary dance with precision, each with his own specialty. 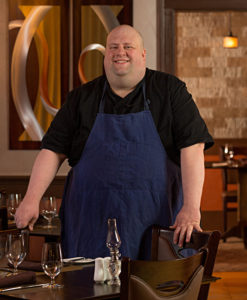 While Chef Andrew was born in Ypsilanti, MI, if you ask him where he’s from, chances are he’ll tell you Texas.  His family moved to Texas when he was eight, where he lived through high school.  He graduated from Plano East Senior High but started working in restaurants even before graduation.  Beginning as a busser at 17, he moved up to food runner then server at the nearby Macaroni Grill.

“I always had an eye on the back of the house,” explained Andrew. “I begged the chef for shifts in back and was in my glory cutting up tomatoes and potatoes.  I guess you could say I caught the bug there,” added Andrew.

Andrew dabbled in college while in Texas, but found that his heart was in the kitchen, confirming his desire to make a career of cooking.  At 24, he enrolled in culinary school at the New England Culinary Institute. Andrew wanted the hands-on experience of cooking for the public that was a hallmark of this program.

His first internship was a six-month stint at renowned chef Tom Colicchio’s restaurant in Victory Park’s W Hotel called Craft Dallas. Here he took on the position of chef intern and chef garde manger (focused on salads, cold apps, raw bar). “It was a tough but beautiful kitchen and a phenomenal experience,” said Andrew. “I learned so much; more than just the practical knowledge,” he added.

After he graduated from the New England Culinary Institute, Andrew returned to Craft Dallas working his way through the different stations from salads to vegetables to the seafood station for a few years.

It was a woman who brought Andrew to New England, and he landed a position at a small new café called Ten Tables in Cambridge. In stark contrast to the shiny kitchen at Craft Dallas, this bistro served unassuming comfort food, yet everything was home made.

After Cambridge, Andrew landed at the Manor on Golden Pond, another DINE member, as the sous chef, which he described as “a lot of fun”. He ended up running the kitchen at The Manor for a few months while a search was on for an executive chef.

During a slow winter at The Manor, Andrew decided to head back to Texas and spent a year and a half as a line cook at the renowned Charlie Palmer restaurant in the Joule Hotel in Dallas.

Yet, life “inn” the kitchen brought him back to New England when Andrew went to work as a sous chef for the Windham Hill Inn.  He loved working there, yet eventually saw an ad for the chef position at the Rabbit Hill Inn.

“I knew that I liked the setting and the inn scene,” explained Andrew. That was five years ago, and Andrew’s story has continued in the kitchen at the Rabbit Hill Inns ever since he was offered the executive chef position there.

Andrew explains that he really enjoys sous vide cooking. Sous vide refers to the process of vacuum-sealing food and then cooking it in a temperature controlled water bath.  He described one oxtail dish that he enjoys creating that goes through multiple steps from raw meat to the plate via a slow braising process.

“I’m afforded a great deal of freedom to do what I love to do here,” said Andrew. “There’s a lot of room for creativity and a huge amount of support. We’re like a family here. The people who work at Rabbit Hill Inn are great; it’s an incredibly welcoming environment,” he added.

“Creational freedom lets me change the menu often.  I like to keep things fresh and changing. We can adapt on the fly. And when all that work goes into each plate and out to the guests, we can all feel satisfied,” he finished.

Andrew’s sentiments help to explain just some of the vitality behind the Travel + Leisure World’s Best Award. 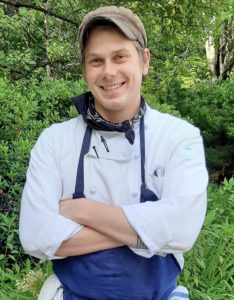 For Joseph Ganley, food has always been an artform. Both an artist and a culinary creator, Joseph finds creating beautiful dishes analogous to painting the artworks that don his walls.

Born in Concord, NH, Joseph grew up in New England.  His restaurant career started at 14 as a dishwasher, where he tells us “I was into music, art and dishwashing at an early age.”

Joseph’s dream was to become a painter.  Hoping to avoid the burden of student loans, he enrolled in art classes as he was financially able, paying as he went along.

“At my first art show, I sold nothing,” explained Joseph.  “I made money running open mikes in the bar at the Contoocook Covered Bridge Restaurant in New Hampshire.  One night the chef was short staffed, and he asked me to come back and help in the kitchen. He told me he saw the same pride in my cooking that I took in my art and my music,” explained Joseph.  The chef gave Joseph a Culinary Institute of America textbook that launched Joseph’s cooking career. “I looked at him as a mentor and realized that cooking could give me the stability I need,” described Joseph.

Next it was on to the Granite Restaurant in the Centennial Hotel which lead to a line cook position at Menton Boston, the modern fine dining restaurant where he was able to learn from the celebrated chef, Barbara Lynch. Joseph describes this position as the ideal place to learn about cooking. It was here where he got to participate in a special event, cooking alongside Chef Daniel Boulud of Bar Baloud in Manhattan. “It was jarring and exciting to be alongside such amazing chefs as Daniel Boulud at that event,” explained Joseph.

Two years ago, Joseph learned from former sous chef at Rabbit Hill Inn about that the position that was opening at the inn.  He applied and has been working alongside Chef Andrew in the compact kitchen ever since. 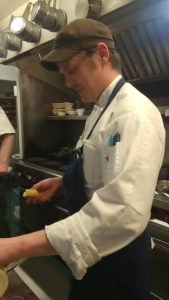 Joseph describes the Rabbit Hill Inn’s kitchen as so much more manageable than any of the other impersonal “hey you” kitchens he worked in. “There’s no yelling, no pots and pans flying.  The overall creative freedom here is like no where else. That opportunity to try something new is unique,” explains Joseph.

Chef Andrew describes Joseph as a good partner in the kitchen. “I love to have someone I can collaborate with and brings ideas to the table. He’s thoughtful in his approach and doesn’t give up easily,” said Andrew.

Joseph’s artistic talents come out in his cooking.  He explains that food is his medium. “To take ingredients out of the ground and transform them into something that feeds the body, mind and soul is artwork,” he says. And his artistry shows on every plate that is delivered to the Rabbit Hill Inn dining room.

Next week we’ll continue our Meet the Chef series by introducing the rest of the kitchen staff at the Rabbit Hill Inn, Phyllis and Brill.

Meanwhile, all of the DINE inns have re-opened and are welcoming guests. The travel restrictions vary from state to state, so be sure to check with each individual inn and book directly too.