We’ve focused our recent blog series on the talented chefs in the kitchens at the Distinctive Inns of New England (DINE).  Each of the 11 Distinctive Inns of New England offer talented chefs and innkeeper creating fabulous breakfasts and afternoon treats in the kitchen.  This series focuses on the chefs and their teams creating memorable culinary vacations in DINE country.

Phyllis started her career in baking at the Rabbit Hill Inn while in high school, where she returned decades later and remains today as the well-loved pastry chef.  Originally raised in nearby St. Johnsbury, Phyllis attended St. John Academy where she started her career in baking under the tutelage of professor, John Carroll. John and his wife, Ruth, would eventually become owners of the Rabbit Hill Inn yet Phyllis made her debut at the Rabbit Hill Inn in 1979 while still in high school, working breakfasts at the inn when it was owned by former owners, Eric & Beryl Charlton .

Phyllis had two brothers who went to culinary school and she enjoyed watching the “fun things they got to do,” according to her. “I always knew I wanted to be hands on,” shared Phyllis recently.

After high school, inspired by her brothers who both studied culinary skills at Johnson & Wales, Phyllis attended the Culinary Institute of America in Hyde Park. Here she learned tactics and skills in all aspects of cooking, leading to her inspiration to one day own her own restaurant.

After the Culinary Institute, Phyllis honed her skills at a number of high end inns and resorts, starting at The Balsams in New Hampshire, renowned for their lavish buffets. She moved throughout the kitchen as a prep cook and was able to gain valuable experience from chefs and owners who were often present in the kitchen.

After the Balsams, Phyllis moved with the seasons, working at the Jared Coffin House in Nantucket, then in seasonal positions in Bermuda and finally at the Riverwatch Restaurant on the island of  St. Simon in Georgia.

Yet, Phyllis still yearned to own her own restaurant.  She returned to New England and completed a degree in Hotel/Restaurant Management from the University of New Haven in Connecticut.  It was here that she met her husband, and together they both fulfilled their dream of opening a restaurant. 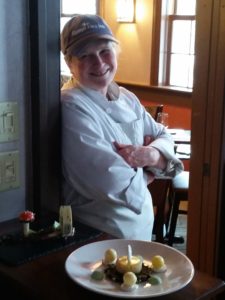 However, after three children, the family moved back to St. Johnsbury so the children could attend St. Johnsbury Academy. While she was working at the Hilltopper Restaurant in St. Johnsbury, Phyllis applied to help out in the kitchen at the Rabbit Hill Inn during the busy fall foliage season. She started in a temporary position there in September, 2007 and has been a dedicated baker there ever since she worked her way quickly into the pastry chef position.

Phyllis prepares all the breakfast pastries, tea treats, homemade breads and desserts served at the Rabbit Hill Inn.  “Creatively, there’s amazing freedom here,” she commented when asked about her position. “What’s changed over the years is the focus on dietary needs.  We need to meet all of them. Our guests need to feel wonderful when they stay here,” she added.

“Yet, most of all, what I love is working for Brian and Leslie (innkeepers/owners),” Phyllis added. “Everything that’s wonderful about this inn starts with them. They set the standard for all of us.  Plus, every day starts with a hug – a huge bonus,” she finished. 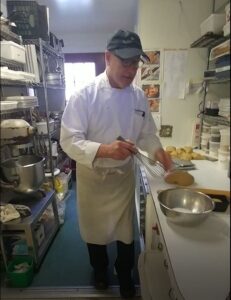 Some might say that Brill was born to work at inns.  He spent many of his years from young teen years on working alongside his mother and father as they opened and built the Inn at Sawmill Farm into a renowned 18-acre, 21 guest room Relais & Chateau property. His father was an architect and his mother an interior decorator, a winning inn owner combination to successfully convert the farmhouse and barn in 1967 into an award-winning inn.  According to a Boston Globe account, the dining room was also once part of the barn, and then-teenage Brill spent a summer shoveling out the stalls to prepare the building for renovation shortly after his parents started renovations.

Brill was the well-known chef at the inn, known for its classic haute cuisine.  Dinners featured such guest favorites as an amuse-bouche of house-cured salmon, and appetizers including caramelized cipollini onion tart and tender sweetbreads on a bed of crisply fried spinach finished with white truffle butter sauce. Even Brill’s famous chocolate sauce was so well loved, it was jarred and became a best seller in the inn’s gift shop. However, Brill’s passion was in wine, which lead to the inn offering one of the largest collections of wine in the country – 28,000 bottles at it’s height.

After his parents retired from the inn, Brill and his sister ran the Inn at Sawmill Farm together with Brill continuing as chef. He would often be seen welcoming guests or cooking in the kitchen throughout this time, until it was sold to the Hermitage Club at Haystack Mountain. Brill spent more than 40 years there, growing up and creating the inn’s culinary reputation.

After the sale of the inn, Brill and his family eventually moved to the tiny village of Lower Waterford, VT, literally just a two minute walk from his door to the Rabbit Hill Inn.  Brian and Leslie knew Brill when he was a fellow innkeeper.

In March, 2014 Brill popped into the Rabbit Hill Inn to say, “Hey, if you fine folks ever need a helping hand in a pinch, I’d be glad to pitch in.”  Little did he know that the Rabbit Hill Inn’s  breakfast cook had just given noticed the day before. It didn’t take long for Brian and Leslie to ask Brill if he would help with breakfast. He smiled and said “Sure. I’m an early riser.” He laughed and said, “This will be great. I’ll have the rest of the day to go fishing or play golf.”

Today, Brill is still the smiling breakfast chef at the Rabbit Hill Inn, enjoying the opportunity to work in an inn kitchen, but without all the pressure of ownership.  His classic French cooking style certainly comes into play at breakfast. His delicate, silky sauces (unrivaled hollandaise sauce, and several others) are a highlight to a variety of egg dishes. Working alongside Pastry Chef, Phyllis, the two experienced chefs create magic in the inn’s tiny kitchen, with memorable breakfasts featuring a savory and sweet option each morning.

Visit any of the 11 Distinctive Inns of New England at DistinctiveInns.com. All of these award winning inns have put great effort and energy into new safety and sanitizing protocols to provide the most safe and memorable experience.  When you book your DINE getaway, don’t forget to book direct!