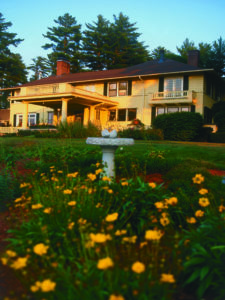 This January, as the pandemic sadly rages on, travelers are spending time dreaming of their next Distinctive Inns of New England (DINE) getaway rather than planning it.  The ten DINE inns understand that for now, imagining your next visit to DINE country may fill the next month or two, but once Covid vaccines are more readily available, it’ll be time to escape back into the world of travel and make up for lost time.

Thus, we are launching a series on the DINE blog to spotlight all that is special about each of the ten Distinctive Inns of New England members.  We’ll offer INNsider information and some background about what makes each of our members so distinctive.  Savor each spotlight and use it to visualize your upcoming DINE getaway.  Once it’s time to safely travel again, you’ll be ready for your next romantic escape to your favorite DINE inn.

The series starts with a spotlight on the Manor on Golden Pond.

Picture the Manor on Golden Pond 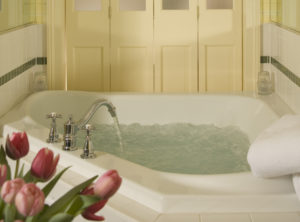 Located high on Shepard Hill in Holderness, NH, the Manor on Golden Pond offers commanding views of Squam Lake , made famous by the movie “On Golden Pond” which was filmed there. With décor that is decidedly reminiscent of an English country manor home, guests are treated to a retreat packed with amenities.  Beautifully decorated guest rooms – with names like Buckingham, Kent, and Cambridge all reminiscent of the inn’s inspiration in Great Britain – come complete with wood burning fireplaces laid and ready to start upon arrival.  Located in the manor house, carriage house, annex or cottages on the 10-acre property, most guest rooms feature whirlpool or spa tubs and views of the lake with balconies or private decks. 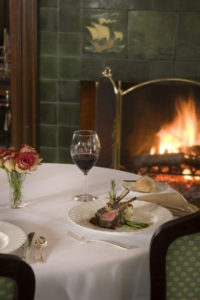 The Van Horn Dining Room, named after the inn’s first owner, Isaac Van Horn, offers a fine dining menu with an award-winning wine list and fireside dining in the winter plus a candlelit setting year round.  Yet nowhere is the English spirit more prevalent than in the inn’s signature Three Cocks Pub where dark wood and small copper tables lend an intimate charm to this favorite guest spot just off the library. Named for the decorative roosters that strut proudly on the copper bar and around the room, the Pub is a place for guests to relax and enjoy a cocktail, a glass of wine or a distilled spirit.

The grand lobby common area and the intimate library both offer gathering spots for guests, along with the spacious grounds. Don’t miss the signature salt & pepper chess board, offering  you own chance at the Queen’s Gambit in front of the fireplace in the lobby living room.  In the summer, the clay tennis court and in-ground swimming pool round out the amenities that 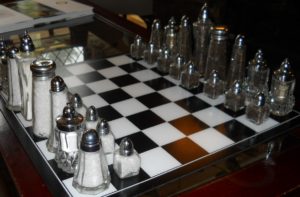 guests love at the Manor on Golden Pond.

The year-round Seasons Spa offers a dedicated 700 square foot retreat for the body and soul with a wide range of treatments available.  Guests can create their own spa packages by adding one or more treatments to their stay.

Each morning guests are treated to multi-course breakfast with specialties of the house chosen from a menu and cooked to order.  While temporarily being offered upon request, the highlight of the afternoon is a beautifully presented hot tea service in the winter and/or iced tea in the summer, always accompanied with sweet homemade treats.  And because no one should ever go to bed hungry, homemade cookies are found bedside each evening too.

There are few details that go unnoticed as amenities and service at the Manor on Golden Pond are impeccable.  Covid protections have been well thought out and exceed the protocols set out by the CDC and state of New Hampshire.  Read here about all the precautions being taken to provide a safe setting for guests at the Manor here. 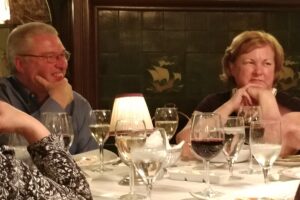 Brian and Mary Ellen Shields, owners and innkeepers, purchased The Manor on Golden Pond in 1999 to complete their dream of creating a luxurious inn known for personalized service.  They brought it back to its English country manor roots and added modern technologies and amenities, like the spa in the restored carriage house.  Yet their story spans two countries and a lifetime of service dedication.

Born in Toronto, Canada and raised on the hockey rink in nearby Scarborough Ontario, Brian is true to his Canadian roots.  If you listen carefully, you can still catch that twinge of an accent. Mary Ellen was born in Whitesboro, NY and grew up there.  Brian met Mary Ellen while attending Clarkson University. They were married and Brian spent years working for Proctor & Gamble, while Mary Ellen held a number of accounting jobs then became a home-based entrepreneur.

Parents to twin girls, and now grandparents too, both Brian and Mary Ellen had a dream of owning and creating a luxury country inn.  They traveled throughout the country, visiting something like 80 different properties before finding the Manor on Golden Pond.  “It was the sense of space, and the views of the lake that intrigued me about the space,” said Brian.  “Mary Ellen loved the fireplaces in the guest rooms,” he added. The two purchased the Manor on Golden Pond in 1999 and set out to bring it up to  “dream quality” and restore its English legacy with extensive renovations. 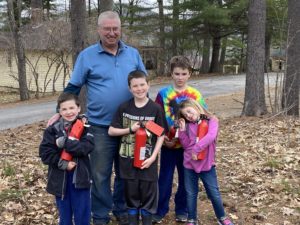 Today, Brian and Mary Ellen are both very dedicated grandparents. Often one will commit to caring for school aged grandchildren in Boston in short bursts while the other maintains focus on the inn.  During the start of the pandemic, with both daughters in careers as essential workers, Mary Ellen and Brian coupled innkeeping and creation of new Covid protocols for the inn with homeschooling four grandchildren for months.

Brian is happiest when tinkering with projects in his workshops.  Mary Ellen finds peace by taking walks up Rattlesnake Mountain overlooking Squam Lake and watching the eagles soar overhead.

History of Manor on Golden Pond

The story of the Manor on Golden Pond begins right after the turn of the 20th century. A wealthy land developer and Englishman named Isaac Van Horn had amassed his fortune developing land in Florida. He captured the heart and hand of Madeine, a beautiful debutante and with his wife by his side he visited the Squam Lakes region of New Hampshire and immediately fell in love with the Lakes Region’s beauty. Upon discovering land on Shepard Hill with its spectacular vistas of the White Mountains and majestic pines, his dream location was achieved for an English Manor style summer home. He purchased the land immediately and began construction immediately in 1904. No expense was spared in bringing artisans and craftsman from around the world to build the couple’s new home a breathtaking setting. The English Manor was completed in 1907, and thus was the beginning of a beautiful setting for the first of many elaborate parties held here. It was quickly recognized as the showplace of the New Hampshire. Don’t stop there.  Read all about the Manor’s interesting history here. 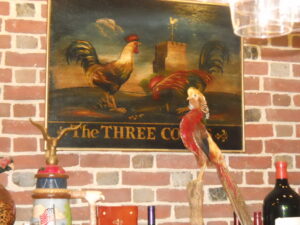 Brian offered two “INNsider tips”, or in this fine story teller’s words, stories about the pub.  According to Brian, “Some folks are very curious about the name of our pub, The Three Cocks Pub.  Most find it humorous, a small few find it offensive.  The history is that the folks who owned the inn in the 1980’s were passionate lovers of traveling to England and especially the Cotswold’s.  When the new owners purchased the inn in 1981, they found a painting in one of the basements on the property titled Three Cocks. There were two roosters depicted on the ground and one rooster on a weathervane in the picture.  Recognizing their love of the Cotswold’s and knowing that many English pubs were named after farm animals, they repurposed the painting by hanging it in the newly named “Three Cocks Pub”.   The photo remains hanging in the pub to this day along with a growing collection of roosters, many offered to the Shields by inn guests.

Brian also added, “The pub also features a device that no-one can explain. Even an exploration with Yankee Magazine failed to turn up sufficient research.  It appears to be a rock float/boat (i.e. a device pulled by horses to clear stones from a field), but it is not large enough nor constructed in a sturdy enough fashion to be that.  Some have thought it is a means of chaffing wheat or similar agricultural action.” Brian invites guests to visit the Three Cocks Pub and give their guess as to the purpose of this mystery device.

The best part of this is that you can make Chocolate Chip Cookie Dough Ice Cream using this same base…….just mix the small junks into your ice cream maker as it blends after following your vanilla ice cream recipe.” 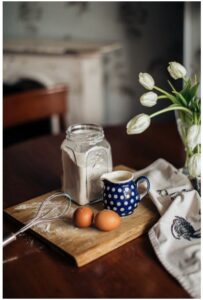 Put the butter and sugars into the mixing bowl. Attach the flat mixing paddle, start on low and, gradually increasing to medium speed;  mix until very light and creamy, about 6 to 8 minutes. Stop to scrape down sides of bowl as needed.

While mixing on medium speed, add the milk and vanilla extract. Scrape again and then add the flour and salt.

Mix on low speed and while mixing, add the chips. Stop to scrape as needed. Mix until well combined.

Scoop the dough and roll in your hands into desired-size pieces (if using with vanilla ice cream, make sure the pieces are small). While the dough can be eaten right away, it is best eaten chilled.

Snickerdoodle:  Add ½ teaspoon ground cinnamon and do not add the chocolate chips. Scoop into tablespoon-size balls and roll in cinnamon sugar on the surface. 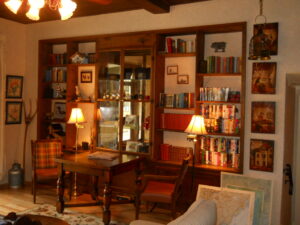 We’ll be spotlighting all of the Distinctive Inns of New England.  Please follow this weekly blog to learn more “INNsider information” about the inns and to plan your next getaway to any of the ten DINE inns.