Recently, an article on WellnessMama.com appeared and really got us thinking here at Distinctive Inns of New England (DINE). It was shocking to read all the statistics about how much stuff people in America  have and accumulate. We at the nine DINE inns concur.  As innkeepers, we both collect and also believe we need to have to have plenty of stuff to ensure a perfect romantic getaway for all our guests.  However, that’s the point – it’s the experiences that make memories, not the stuff.  We’ll explain how an experience in DINE country can surpass more stuff any day.

Do we all have too much stuff? Joshua Becker, an expert on the topic of clutter, shares some sobering trends on his Becoming Minimalist blog. He tells us that in 2013, the LA Times reported the average American home had over 300,000 items in it. Fast forward ten years and imagine how that number of items has grown. 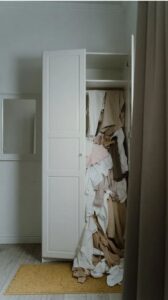 Even more staggering is the thought that we have so much stuff we don’t even have room for it. According to the Wellness Mama story, there were over 50,000 storage facilities nationwide and storage is the fastest-growing real estate segment. At least one in ten American rents or owns a storage unit to store excess stuff.  What’s even more mind boggling is that there are five times more storage facilities in the U.S. than the number of Starbucks! Supposedly, that means there’s enough physical space for every man, woman, and child in America to stand in U.S. storage facilities—all at the same time! That’s a lot of places for a lot of stuff.

In this country Americans have and consume twice as many material goods as we collectively did 50 years ago. Yet according to WellnessMama, statistically, we’re much less happy these days. In fact, 54% of survey takers report being overwhelmed with clutter, and 78% have no idea how to overcome it.  Think of all those collective hours you’ve spent just trying to locate keys, glasses, phones or other stuff.  Our stuff borders on controlling us.

Many studies show possessions don’t equal happiness. And that experiences are much more intrinsically fulfilling than things. (Extra bonus: you don’t have to find a place to store experiences except in your heart, memory, and maybe in your photo gallery on your devices!) 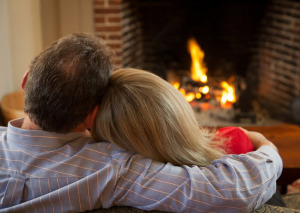 The article on WellnessMama.com outlines how Thomas Gilovich, a researcher at Cornell University, has spent more than a decade exploring how experiences contribute more to happiness than stuff.  His study concluded people are less happy with material purchases over time and happier with experiences. The study authors speculate this is because we adapt to physical things. So even the nicest car or newest phone becomes commonplace after enough time. Memories, however, tend to get fonder over time.

Gilovich explains: “Our experiences are a bigger part of ourselves than our material goods….You can really like your material stuff. You can even think that part of your identity is connected to those things, but nonetheless they remain separate from you. In contrast, your experiences really are part of you. We are the sum total of our experiences.”

Bottom line, you can’t buy happiness, but you can make a romantic getaway to any of the nine DINE inns available.  By creating a destination for romance, pampering, great food and relaxation, you’re assured of creating good memories that live in your heart and as Gilovich explains, are part of your total sum experiences that define you. Each DINE innkeeper is committed to offering the perfect place and setting for happiness and love.  As they say, love is what makes the world go round, not stuff!

In setting resolutions for the new year, remember this blog.  Whether its making plans for an upcoming weekend or considering the perfect gift, we hope you’ll turn to experiences at your favorite DINE inn(s) in 2023.

It’s not too late to plan that fabulous New Year’s Eve (or after) getaway.  Start 2023 out right at a DINE inn. Remember, be sure to skip the online travel agencies, and book directly with the DINE inn of your choice this year.

In Maine:  Inn at English Meadows in Kennebunkport.